OOB in the Press?

It's thanksgiving as i write this, and i just read this again:
http://artsbeat.blogs.nytimes.com/2007/11/20/broadway-lockout-survival-guide/
i can't for the life of me figure out why mainstream journalists in New York seem so almost-stubborn in their refusal to acknowledge Off-Off-Broadway.
In the midst of this strike, with media struggling to advise tourists and would-be Broadway audiences of alternatives to the closed theatres, some of these guys can't bear to bring themselves to utter "Off-Off-Broadway". I mean, seriously, isn't that an odd sort of selective blindness? Do they honestly believe OOB doesn't hold a legitimate place in the artistic landscape of this city and country?
Especially now, when Broadway tickets can cost literally $450. No one can afford that. Big companies with expense accounts can, and very rich tourists can. Outside of that there is only a tiny fraction of people who can and will afford that, and if that's what Broadway is choosing as its target market now, then why would the rest of us even care?
There is a better alternative for human beings who want to see live theatre.
Off-Off-Broadway. Affordable Theatre.
Maybe we should start marketing it that way.
You can even think about it as "local and organic" if you want. No out-of-town tryouts, no artificial ingredients or helicopters. But the bottom line is
1) you're going to sit close enough to actually see the actors' facial expressions (unlike the last 4 broadway shows i saw).
2) you're going to experience the show in a more intimate environment - usually less than 100 other people
3) you're likely to see real creative exploration, risk-taking and experimentation
4) you're likely to see real innovation (BlessedUnrest's recent show featured the most innovative use of a plastic tarp i've ever seen. absolute theatrical magic from a $30 prop/set piece)
5) you're ticket will cost less than a day's pay
Here, for about 20 bucks you can see something that just might change your life. It's shameful that our press refuses to step it up and properly cover this amazingly vibrant and critical theatre.
Is there something else we should be doing to "merit" their attention?

Posted by Hillary Cohen, Development Manager at 11:39 AM No comments:

101 Ways to Promote the Arts

Hey all I know this is cheating a bit, as I'm going to post an article written by someone else, but it is so invaluable to the OOB/Indie world, I think this is a great place for it. Additionally, on Wednesday I'm recording a Podcast with Martin Denton about Publicity, I'll let you know when it is airing...stay tuned.

101 Ways to Promote the Arts:
Compiled by the Arts & Business Council of Miami

When looking at the suggestions on this list, consider your Target customers. Try
to see things through the Target customer's point-of-view. Will they respond well
to this particular type of promotion? Is the type of Promotion likely to reach the
customers your organization is trying to capture? Do you have facts to back up
your assumptions?

As always you can contact me with questions!
Fondly,
Katie Rosin
Publicist New York IT Awardswww.kampfirefilmspr.com
pr@nyitawards.com
917-438-9223
Posted by Hillary Cohen, Development Manager at 11:38 AM No comments:

Tom O’Horgan has left the city.

If you are involved in the theatre, you have probably heard the name Tom O'Horgan. He was the original creator and director of Hair and Jesus Christ Superstar, two productions that revolutionized the modern American musical.

Mr. O'Horgan achieved what many artists aspire to -- he had created something unique, something that was truly an expression of himself. His vision excited people in the general public and became a cultural phenomenon. He achieved both critical and commercial success. Yet he never rested on those laurels. He continually returned to his roots, to explore and experiment, striving to find new ways to communicate with his audience. He never simply accepted the traditionally agreed upon terms of the theatre. He would place actors in the audience or bring audience members to participate on stage, stage productions in apartment buildings or on fire escapes. He pushed the boundaries of our society, experimenting with gender identity and tackling subjects such as racism and sexism in the 1960's. I think it is because of this drive to always invent something new and interesting that he never because a cliché.

I first met Tom at a symposium that was hosted by the IT Awards in 2004. Many of the founders of the Off-Off-Broadway movement attended. Even though Tom was not in the best of health, he climbed the flight of stairs to the second story of the Drama Book Shop. He proudly sat amongst his peers, many of whom he hadn't seen in 35 or 40 years. He clasped hands with old friends, reminisced and laughed with former colleagues, patiently obliged autograph seekers and posed for photos with admiring young artists who where giddy with the prospect of meeting a living legend.

In 2005, the IT Awards held our first annual awards ceremony. We were presenting the Stewardship Award (for service and leadership to the Off-Off-Broadway community) to Ellen Stewart, LaMaMa herself. Tom was very instrumental in forging the fledgling LaMaMa and when asked who she'd like to present her with the award, Ellen said, Tom O'Horgan. I didn't get to see Tom much that night. I was in producer mode and he was in the early stages of Alzheimer's Disease and public appearances were draining. However I did manage to have my photo taken with him.

The following winter Marc Cohn, Tom's assistant and friend, and I worked together on an application for the honorary IT Awards. Marc mailed me Tom's CV which was over 150 pages. I work with doctors - not just doctors, academic doctors - whose CVs are quite extensive and include everything they've ever done. You are considered to be very accomplished if your CV is 30 pages. Looking through Tom's CV was much like looking at Elvis' room of gold records. You have an entirely different appreciation for his achievements. Tom was the only director in history to have 4 Broadway productions running simultaneously: Hair, Jesus Christ Superstar, Lenny and Inner City. I understood Marc's frustration is trying to sum up Tom's accomplishments in a mere 2 or 3 pages. There was certainly not enough room to give a complete accounting of Tom's contributions, but we did our best.

In September of 2006, Ben Vereen, star of Hair and Jesus Christ Superstar presented Tom with the Artistic Achievement Award. Ben spoke for over 10 minutes about his longtime friend calling him a genius and visionary. Tom was met with a vigorous standing ovation. When the audience finally took their seats, he leaned over the podium and simply said, "I'm in love with this whole game."

In October of 2007, I started to hear the rumors that Tom would be leaving the city and selling his property to help pay for living and medical expenses. Tom's apartment is a huge artists loft complete with music room and stage. All of the walls, floor to ceiling, are lined with musical instruments, art, masks, books, show posters and many other items all of which have sentimental value to Tom. When looking at the collection you feel like a child, excited to try the various instruments or hear the stories of the Hopi Indian doll or the Balinese mask.

On Saturday, November 3rd, 2007 Patrick and I got up early and arrived at the loft to help Marc organize and prepare for the sale. At 10am, invited guests showed up and began to search through the piles of books and stacks of drums. At 11am the general public began to pour in. From noon until 4pm was a blur. There were so many people asking so many questions. Some people were excited by the fact that they could own a musical instrument that belonged to a Broadway star. Others had no idea who Tom O'Horgan was but saw people exiting the building with the most interesting items and despite the $25 entrance fee, they just had to check it out for themselves. By 5pm there was only a small group of Tom's closest cohorts that just couldn't tear themselves away. They stockpiled trinkets and chimes and spent thousands of dollars just to have some mementos their beloved friend. They cried and hugged and agreed to meet for dinner.

There were some truly amazing and wonderful things that people bought, but I think that Patrick and I took home the coolest thing of the entire sale. We are now the very proud owners of the giant silver mask from the original Jesus Christ Superstar. For a mere $300 we purchased a piece of theatre history and one that has personal meaning and sentimental value for us both.

I feel so blessed to have had the chance to get to know Tom on a personal level. Although I don't think he remembers me or any of the time we spent together.

Tom is being cared for by friends in Sarasota, temporarily until a home is completed near the Tom O'Horgan Theatre in . There he will be surrounded by his most cherished items and will receive the medical care and attention that he needs.

Even though I know that Tom will be well looked after by Marc and his wife, I am saddened that there was no health insurance or support system to care for this man, this truly remarkable artist.

Posted by Hillary Cohen, Development Manager at 11:37 AM No comments: 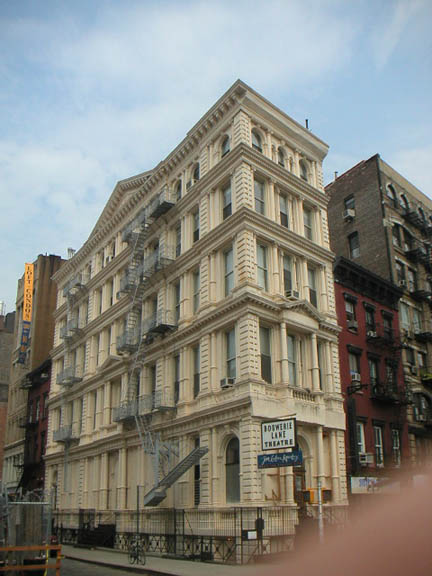 The : Designed one hundred years ago by Henry Engelbert, this cast iron building is a rare example of the French Second Empire style, and is an historic landmark. The building was home to the German Exchange Bank, then later housed the Bond Street Savings Bank. The space was converted into a theater in 1963. The old vault still exists in the basement and the box office window was one of the original teller windows.

A theater since 1963, and from 1974 – 2007 was the home of the Jean Cocteau Repertory, a leading Off-Broadway company dedicated to the classics.

It was purchased in June of this year by "Self-Storage King" Adam Goldman for a reported $15 million dollars. He plans to reside in the top floor and lease out below to "respectable" retailers.

Posted by Hillary Cohen, Development Manager at 11:30 AM No comments: