Our update went out this morning: sign up for it here if you're not on our list. Some highlights:
NYIT Awards present study findings to NYC's joint Theatre Task force
"A joint Theatre Task Force meeting with Community Boards 3, 4 & 5 was held on October 29th to discuss the role the cultural sector plays in the city and way in which it can expand. According to Paul Nagel, Arts and Culture Liaison for the New York City Council, 'arts and culture have a central role in business, education, community, and government, yet cultural policy in the United States has not moved beyond a 1970s model of allocating and distributing grants to not-for-profit organizations.'

At this meeting, The New York Innovative Theatre Foundation presented the findings from a 5-year study, "Report of Off-Off-Broadway Performance Venues," which analyzed data from September 2004 through the present."
Highlights of the report:
Read the rest of Doug Strassler's story on our Space report & the Theatre Task force...

and Matt Freeman reported on the AEA Showcase updates:

"Short version: if we want to change the Showcase Code, we need members of the union to speak on their own behalf to the union, and ask for changes in the code that will allow smaller theaters to grow and provide better opportunities for actors. Playwrights, producers and directors may have opinions, but only the voices of actors will make this change happen."

A big thank you to Doug, Matt, Emily and all of our contributors.
Posted by Morgan Lindsey Tachco at 10:44 AM No comments: 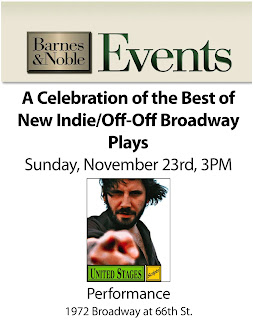 Spreading the good news! Indie playwrights get their due in November reading & book signing events.

United Stages book titles will be available on their web bookstore at the beginning of 2009.

United Stages publishes original scripts from today’s Off-Off-Broadway/Indie theater scene. US scripts are a smart resource for theater companies looking to present the vanguard of plays and playwrights. For actors they offer fresh material that casting agents and teachers haven’t seen time and again. Our play catalog celebrates the unfolding of NY theater history from Caffe Cino legends to emerging indie stars.

AND the TENTH ANNIVERSARY of NYTE’s Plays and Playwrights continues with a free staged reading of Daniel Reitz's Fall Forward.

You can check out all of the Plays & Playwrights details at NYTE Small Press & Check out the Facebook invite for this event.

Posted by Morgan Lindsey Tachco at 11:22 AM No comments: 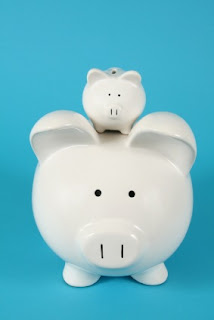 According to the Chicago Tribune, New York isn't the only theatre scene with space issues.

What interested me was the mention of the Children's Theatre that is piggybacking on a museum for their space. It didn't seem to be an ideal situation for them and I'm obviously not a fly on the wall at their board meetings, but I wonder why these organizations are working against each other?

Which makes me wonder: in hard economic times, is there a place in New York for larger non-theatre institutions to develop collaborative fellowships to emerging artists from different mediums that deal with the same issues? How much would you benefit from being able to develop and present a multimedia ensemble piece with the Museum of Photography, for example? Does this already exist somewhere?
Posted by Morgan Lindsey Tachco at 9:43 AM No comments:

Was reading over at The Clyde Fitch report that another NYIT Award recipient is crossing over to Off-Broadway! Rising Phoenix Repertory (2007 Cafe Cino Fellowship award), and will present TOO MUCH MEMORY at the East 4th Street Theater in December.

Congratulations, Rising Phoenix!
Posted by Morgan Lindsey Tachco at 9:31 AM No comments:

In the spirit of change, community motivation and hard work ahead, I’m happy to spread the word that the AEA showcase code reform movement is again receiving attention. On Theatre and Politics has great information linked to his post regarding this issue.

The showcase code is being re-evaluated by Equity, and Michael Bell - a member of the AEA Off-Off Broadway subcommittee - has announced that he'd like to hear thoughts from code participants on how the AEA Showcase Code works (or doesn’t) for them.

If you've had experiences with the AEA Showcase Code, your voices are instrumental in moving this forward. Share your experiences and suggestions by emailing him or by commenting on his announcement.
Posted by Morgan Lindsey Tachco at 2:36 PM No comments: