Contributed by Shay Gines
I would like to give some tips for preparing for the Hurricane.  I usually send out preparedness advice only to friends, but someone said that I should post it on our blog and so... I am.
"Shay, what qualifies you to give any tips for hurricane preparedness?" You may be asking yourself. And that my friend is a fair question.
The real answer is nothing. I am not an expert. However, for six years I worked for a national disaster preparedness organization and while I was only the office manager and certainly do NOT have any degrees or credentials in disaster preparations, I was instrumental in creating a number of preparedness guides and did tons of research. And you know, I picked up a few things. So this is what I've learned, take it for what it is worth.

First off, the hurricane will probably not be as scary as the news makes it out to be and for most of us will more likely be an interesting and exciting day that will end up in stories and plays for the next couple of seasons. However, it currently looks like it will hit NYC as a category 2 hurricane, which is stronger than was originally thought, so you do need to be cautious.

There will probably be some power outages and depending on the extent of the outages, it could take several hours to get it back up.

The MTA has already said that it will be halting all service and expects that there will be some damage due to flooding. So... it may be some time before it is all up and running again.

The real danger is from flying objects (such as lawn furniture or wind chimes) that the wind picks up and whips around. So of course you should stay indoors.


For those folks outside of the evacuation zones, here are some preparations that you can make:
Here are some tips from people who actually do have degrees and credentials at the Red Cross.

You can track the storm on the National Oceanic and Atmospheric Administration website and they provide news about the storm without all the hype.
And here is a pretty funny article to help keep it all in perspective: Brooklyn's Guide to Hurricane Preparedness by Choire Sicha.
Be safe!

Posted by IT Foundation at 12:13 PM No comments:

How do you feel about comps?

Contributed by Shay Gines
I wanted to talk about something that is a little bit controversial in the OOB community - Comp Tickets. My friend Jason Bowcutt and I have had an ongoing debate about comps to Indie shows.
There are a lot of indie shows that we want to see. We don't always have the time or the money to attend all of the amazing stuff that happening in this community.
JASON'S TAKE:
It is important for us to see as much of the work as we can. If we don't have the money, it is more important to see the work than it is to pay for the ticket. So it is completely acceptable to take advantage of industry and Equity comps.
MY TAKE:
As someone who has been a producer, I know how much every dollar means. When I reviewed shows I had no problem accepting the comps because I felt I was doing a service for the production by providing publicity and critique. The same is true if I helped paint the set or helped out at the box office, etc. However, if I am just going to see the production for myself, I feel uncomfortable asking for comps. Moreover, I feel that so much work goes into getting these shows up on their feet, that they have earned my $20.
Of course there are a lot of shows that I miss because I'm short on cash.
So, what are your thoughts? Which is more important seeing the show, or paying for the ticket? Do you have a personal code when it comes to accepting comps? 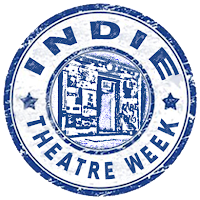 Artistic Autonomy
The quality that drew me to self-producing and indie theatre in the first place is the level of freedom and control it provides for the artist. You don’t need to ask anyone’s permission in order to see your creation realized; all you need is an artistic vision and the drive to see it executed. This free rein results in a body of work created in the indie theatre world that is remarkable diverse, exciting and unconventional.
Creativity and Innovation
Certainly self-producing has its restrictions and limitations. We typically have to work with a tiny budget, limited space options and less resources in general than a commercial production. All of the troubles and difficulties that crop up in production must be tackled by you and your company, but there is no limit to what you can accomplish outside of your own abilities and strengths. Indie theatre is fundamentally about working with the essentials. If our resources are limited, that forces us to develop inventive and innovative solutions to solve the problems we encounter.
Intimacy with the Audience
One of the greatest artistic aspects of theatre is the fluid nature of the art. The audience is reacting to a performance as it is being created, and their response will in turn shape the actors performance. This relationship is heightened in an indie theatre production by nature of the small spaces we work in. With an upper limit of 99 seats (and many spaces run much smaller than that), there is an inherent intimacy between the performers and their audience that can be intensely rewarding (and that is much harder to pull off in a cavernous Broadway house).
The Community
I have found the artists and producers that work in the indie theatre world to be some of the most talented, motivated and energized people I’ve ever encountered. In my dozen years working in the indie theatre scene in New York, our community has been endlessly helpful and supportive. Whether it’s searching for a specific and rare prop, looking for that perfect actor to cast in a hard to fit role, or simply rallying folks to attend an undersold performance, the community has been there for us again and again. The IT Awards are a great example of the way this works: created by individuals in the community to celebrate the work of their peers and judged by the larger indie community as well as the audiences drawn to indie theatre.
___________________________________________
Pete Boisvert founded Nosedive Productions with James Comtois in 1999. He has directed over two dozen productions with Nosedive, including Infectious Opportunity, The Adventures of Nervous-Boy (a penny dreadful) and The Blood Brother presents… horror series. Outside of Nosedive, Pete has directed the premiere productions of Temar Underwood’s The Brokenhearteds and Katharine Clark’s The B Side. A graduate of Ithaca College, he has trained with Anne Bogart's SITI Company in both Saratoga Springs and New York City and with the Vampire Cowboys' Rabid Vamps Fight Studio. He is currently rehearsing for remount production of Infectious Opportunity, to be performed in the NY Fringe Festival this August.
Posted by IT Foundation at 10:30 AM 1 comment: