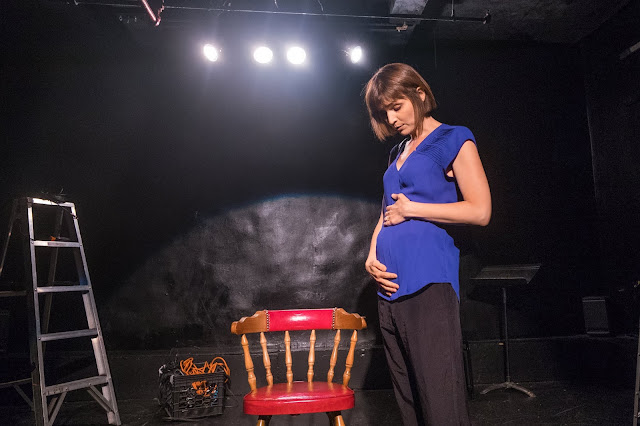 About the Company: Good Pilgrim likes art that thinks of life as a great pilgrimage; dramatic, funny, in desperate need praying hands and joyful spirits.

About the Production: Although Essie has mixed feelings about being pregnant — she’s a successful New York actress with a happy marriage — she warms to the idea, until she learns the baby has a genetic disorder. Haunted by her past, Essie examines her life’s work, worth, and the future of her family.

What drew you to this project?

Kathleen: I wrote this play for my friend Amie Cazel to perform. Amie and I became thick as thieves when she got pregnant and gave birth during our last year of grad school. As I watched her baby while she was in class, I thought about how hard it is for performers with families. We talked more and more about it, and this play was born.

Amie: Essie's story is meant to help facilitate the conversation that is so difficult to have across the usual lines of religion or politics. Pregnant Pause capitalizes on what theatre does best by creating space for dialogue and allowing for questions that might not have clear and simple answers. Our audiences have included Catholic monks and Planned Parenthood supporters, both of whom identified with Essie's struggle. This work is a collaboration between theatre makers with varying opinions of abortion. The play was written with a sincere desire to collaborate on how best to support women who are in the crux of these choices. As theatre makers and storytellers, our team is committed to bringing women's stories into the spotlight. 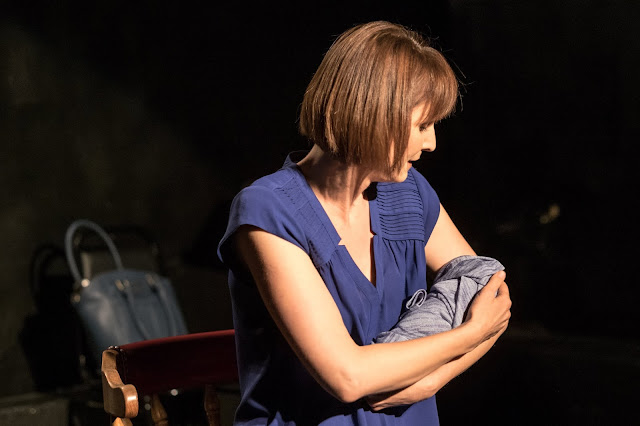 What was your favorite part of working on Pregnant Pause?


Kathleen: My favorite part was working with my buddies! Amie and Maureen (Monterubio, our director) are stellar artists and badass women, and working with them every day was a blast.

Amie: Our favorite part was working with a talented team of committed and thoughtful women! For our production at Planet Connections, we were grateful to have the most amazing collaborators: director Maureen Monterubio (who directed the premiere at United Solo in 2016), stage manager Ashley J. Nickas and lighting designer Darielle Shandler. When working on a piece that requires such sensitivity and empathy, these women were true artistic companions.


What was the most challenging part?


Kathleen: The most challenging part was toeing the line in this play about abortion; keeping the focus not on "abortion" but on Essie, on this one woman, on her one journey.

Amie: Performing a solo show can feel lonesome. This is one reason why having a strong and supportive production team is so necessary. One can miss the camaraderie that comes with working alongside other actors. Instead, it's as if the audience gets cast in the show. For the solo actor, this is both daunting and thrilling.


What was the funniest thing about this production?


Kathleen: Half of our production team was pregnant! Thankfully Ashley (Nickas, our SM) and I held down the non-pregnant fort. Very glad Maureen waited to give birth until after our final dress rehearsal; and her baby was here for opening night!

Amie: I played Essie, a 19-week pregnant woman, while I was actually pregnant! When production plans began, there was no anticipation of a pregnancy, but once rehearsals were underway, more was revealed. Also, director Maureen Monterubio was 8-months pregnant during rehearsals. She went into labor soon after the final dress rehearsal.


What lesson did you take away from this experience?


Kathleen: Just write what's on your heart. Write into the unknown, into the fear. I didn't know how this play was going to turn out, I had a lot of anxiety about writing about such a challenging subject. But it turns out, that's where the good stuff is.


Kathleen: It means that Amie and I will have something to brag about, when we go door-to-door for our next project! That's a joke, but also the reality. Good Pilgrim was born out of the friendship Amie and I have, and our desire to produce the same kind of quirky-yet-meaningful work. It's nice to know that other people responded to the work too.

Amie:This nomination means that there's still a place in people's hearts to talk about hard subjects with grace. Pregnant Pause is a play about abortion, which is crucial to talk about, but hard to do so without polarizing viewpoints. We were so proud to have a diverse audience: One show had pro-life nuns and activists for NARAL in attendance! We are proud that we were able to bring different voices together to listen to and honor women and their stories.


What did you want the audience to come away with after watching Pregnant Pause?


Amie: The play is meant to be a conversation starter, not a statement. Women and men find themselves somewhere in the story. Post show, when we hear audience members sharing about their own experiences and listening openly to others, that feels like a huge win! 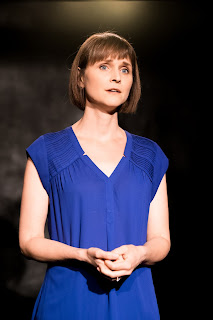 
Kathleen: The women we worked with have a lot of compassion, a lot of heart. That goes so far when you're working on delicate material.


Amie: Kathleen and I are true collaborators! We became fast friends during graduate school and Kathleen was my closets confidante when I had a surprise pregnancy mid-way through their MFA program. When we moved to New York and Kathleen had the idea to write a play about an actress experiencing a difficult pregnancy, Pregnant Pause became the perfect project to workshop together. We have found grace and joy in our creative collaborations, and in particular for these nominations, we wouldn't be one without the other.

Celebrating 15 years and the 2019 Award Nominees

New York, NY: On Monday, July 29, 2019, The New York Innovative Theatre Awards, announced the 2019 nominees for the annual Off-Off-Broadway awards. The It Awards have celebrated the vibrant and creative theatre community for the past 15 years.  The official announcement took place at (Le) Poisson Rouge by six celebrated artists and producers from the community including: Jazmyn Arroyo, Jennifer Betite Yen, Iyvon Edebiri, Chris Ignacio, Ashley Rogers, and Erez Ziv. 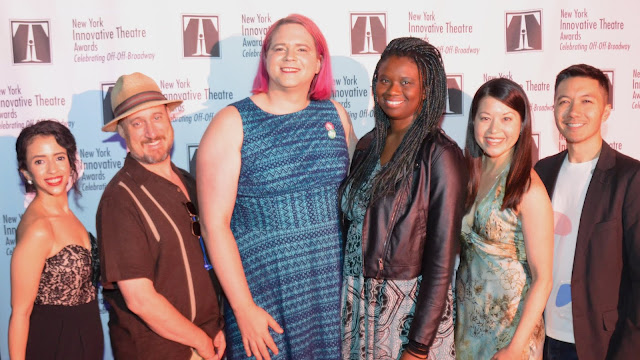 “It's remarkably nourishing to receive recognition from the larger New York Indie Theatre community, which feels like a continuation of the work we started with our production,” said Alexis Roblan who is nominated for Outstanding Original Full-Length Script for Red Emma and the Mad Monk.

“Fifteen years is a big milestone for our organization, and we are making the most of it. We are looking forward to sharing some amazing surprises over the next few months,” said Executive Director Shay Gines.

The 2019 New York Innovative Theatre Awards Ceremony will take place in September. Watch our twitter account for details to be announced soon @nyitawards.

Press photos and information about the event are available at www.nyitawards.com and from our press agent Katie Rosin at 917-512-2626 and pr@nyitawards.com.

Kim Katzberg
Dad in a Box
Eat a Radish Productions


OUTSTANDING ACTOR IN A FEATURED ROLE

Connor Chaney
The Harrowing of Hell
American Theatre of Actors in association with Collectio Musicorum, Inc.


OUTSTANDING ACTRESS IN A FEATURED ROLE


OUTSTANDING ACTOR IN A LEAD ROLE


OUTSTANDING ACTRESS IN A LEAD ROLE

Lisa Strum
whatdoesfreemean?
Nora's Playhouse in association with The Tank

Annie Garrett-Larsen
And Then There Were None
The Secret Theatre

Kia Rogers
Real
Rodrigo Nogueira in association with The Tank

Marissa L. Menezes
Once Upon a Mattress
Gallery Players

Yunzhu Zeng
Where Is My Maple Town
MapleTown Production Company

Lily Guerin
The Year of the Solar Eclipse
Kyoko & Ezra

Magnus Pind Bjerre
for Video Design
The Neurology of the Soul
Untitled Theater Co. No. 61

Kim Katzberg
Dad in a Box
Eat a Radish Productions

Carrie Robbins
The Dragon Griswynd
Days of the Giants LLC

Arkham
Part of the 10th Annual H.P.Lovecraft Festival
Radiotheatre in association with Theatre At St.John's

The Harrowing of Hell
American Theatre of Actors in association with Collectio Musicorum, Inc.

now my hand is ready for my heart: intimate histories
LaMaMa Experimental Theater Club In Association with Mount Tremper Arts


OUTSTANDING PRODUCTION OF A MUSICAL

Into The Woods
Theater 2020

Red Emma and the Mad Monk
The Tank & Emma Orme


OUTSTANDING PREMIERE PRODUCTION OF A PLAY

Worse Than Tigers
The Mill in association with New Ohio Theatre


OUTSTANDING REVIVAL OF A PLAY

And Then There Were None
The Secret Theatre

The Maids
The Seeing Place Theater


The New York Innovative Theatre Foundation is a not-for-profit organization recognizing the great work of New York City's Off-Off-Broadway, honoring its artistic heritage, and providing a meeting ground for this extensive and richly varied community. The organization advocates for Off-Off-Broadway and recognizes the unique and essential role it plays in contributing to American and global culture. They believe that publicly recognizing excellence in Off-Off-Broadway will expand audience awareness and foster greater appreciation of the New York theatre experience. www.nyitawards.com 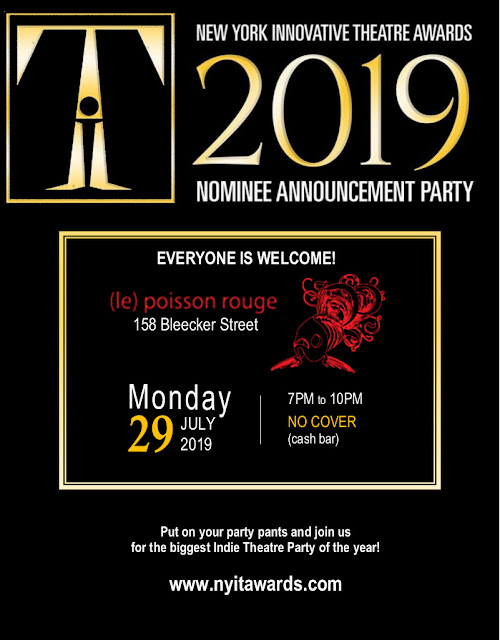 Posted by IT Foundation at 5:09 PM No comments: