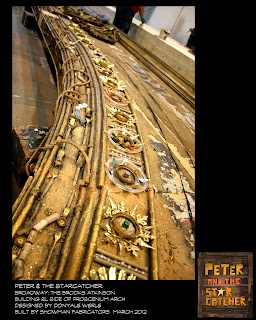 Greening the Great White Way began in earnest in 2008, when a few dedicated theatre professionals saw ways in which Broadway could set the stage for more sustainable productions, without losing any razzle-dazzle. TheBroadway Green Alliance has created a wide array of eco-initiatives, motivating professionals and audience members alike to adopt a greener ethos.

The storied lights of Broadway are beautiful, but the environmental impact of incandescent bulbs was anything but. The BGA accomplished the Herculean feat of bringing theatre owners to the same page and making all marquee lights energy-efficient LED bulbs – all 100,000+ of them, saving over 700 tons of carbon a year. The shows are still hot, the planet a bit less so.

When it was observed that the binders used for scripts and light cues were thrown out after every show, the BGA created the Binder Initiative, offering a place where binders could be donated after use and recycled into another show. The initiative is an incredible success, saving mountains of binders from landfill. The BGA is working to bring Off-Broadway and other local theatres, for whom costs are an even bigger concern, into the program.  Soon, there will be binders that have been in more shows than some of the busiest actors in town.

Those busy actors often wear body mics, and the need for fully-charged batteries is mandatory. The BGA has convinced most of the productions to opt for rechargeable batteries, thus keeping thousands of tons of toxic waste out of the system and saving money for more important investments.

One of the BGA’s greatest successes has been in tapping individuals’ green passions, whether they are ardent environmentalists or just want to lessen waste. Many shows now have a “Green Captain” – one person, whether in cast or crew – who acts as advisor, point person, and liaison, helping to green the shows and the people who make them happen.

At that great green musical Wicked, the Green Captain is actress Nova Bergeron. On the road, Nova discovered many theatres had no recycling facilities, so she gathered cans & bottles and recycled them herself. Since she joined the Broadway company, just a few of her accomplishments include: switching everyone to recycled-paper tissues, swapping paper for fabric towels, gathering #5 plastics to recycle at Whole Foods, and collecting corks and makeup containers to recycle at TerraCycle (with her help, the BGA has kept over 18,000 corks out of landfills!). ‘Wicked’ also green-lit welcome tote bags with stainless steel water bottles for all new company members, which Nova presents. She is currently creating a labeling and storage system for reusable flatware so that the company can stop buying – and throwing out – plastic utensils.

Over at the new play Peter and the Starcatcher, currently up for 9 Tony Awards, co-star Adam Chanler-Berat assumes Green Captain duties. Busy as he is, he felt this was too important a responsibility to pass up and hopes to inspire others as well. Already, he’s got many cast and crew members to use reusable water bottles and they fill from the tap, as opposed to plastic jugs. Next, he plans to install recycling bins in every dressing room, put up signs reminding everyone to turn off lights, and join Nova in the cork collection.

It’s easy to be environmentally inspired at Peter, because innovative set designer Donyale Werle made much of the set from reused materials or items she found dumpster-diving. The Tony-nominated set is one of the most exciting in town, proving that you don’t need to make an impact on the earth when you are making one on stage.

The BGA is constantly developing new projects and greater outreach. Everyone is welcome to join and help Broadway scale higher, greener heights.

Sarah-Jane Stratford is a New York-based writer, activist, and green advocate. She is the author of two novels and her work has appeared in Guernica, The Guardian, and Women and Hollywood, as well as being performed with Liar's League, New York. She is currently working on novel about World War I espionage and a play about censorship and sedition.