I first saw Izolyatsia just over a year ago. Yara Arts Group, which I direct, was invited to create a new theatre piece for the Izolyatsia Platform for Cultural Initiatives housed in an old factory complex in Donetsk, a city in eastern Ukraine. Donetsk is known as the home of miners. I had been there once before with Serhiy Zhadan, a wonderful young writer, exploring working mines and illegal digs. So I started thinking of tunnels and what people imagine while they are underground. 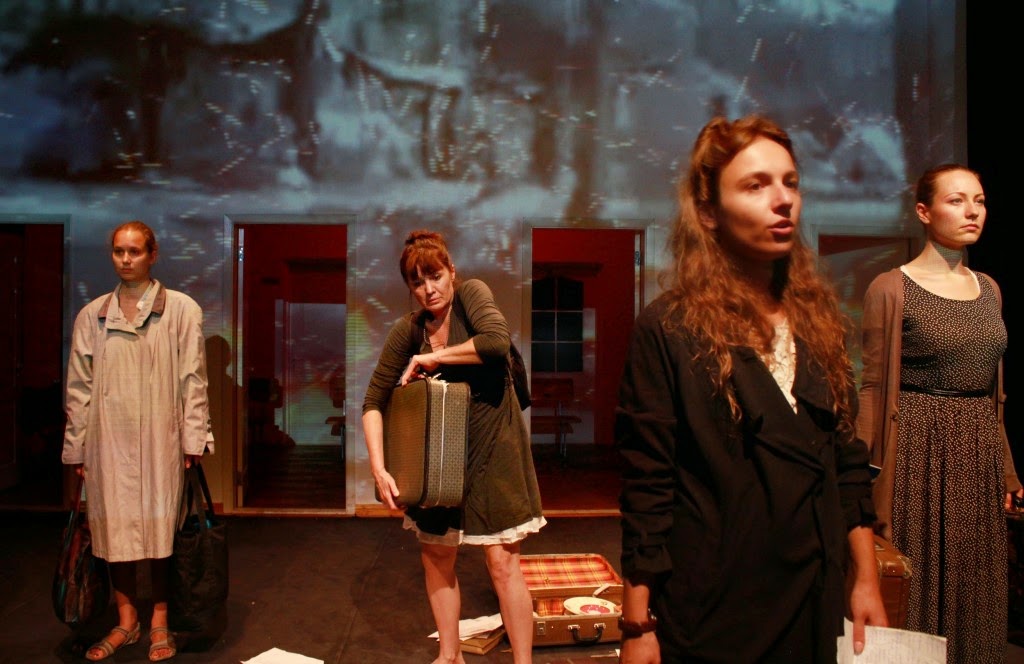 Luba Mykhailova, the founder of Izolyatsia, liked my proposal to build a tunnel, but asked that we think about people other than miners. We decided to interview young people in Donetsk and posted a note on a local website inviting people to come tell us about their dreams and their city. Over twenty people showed up. Most were in their early 20s and were overwhelmingly positive about Donetsk and their hopes. As we recorded them, our designer Volodymyr Klyuzko photographed them. We decided to create an installation based on these interviews. We made giant cubes with their photographs. As you approached each cube you could hear the stories people told us. We also started a workshop for young performers and worked on the dreams they would relate in the labyrinth we built out of huge slabs of Styrofoam the factory produced. 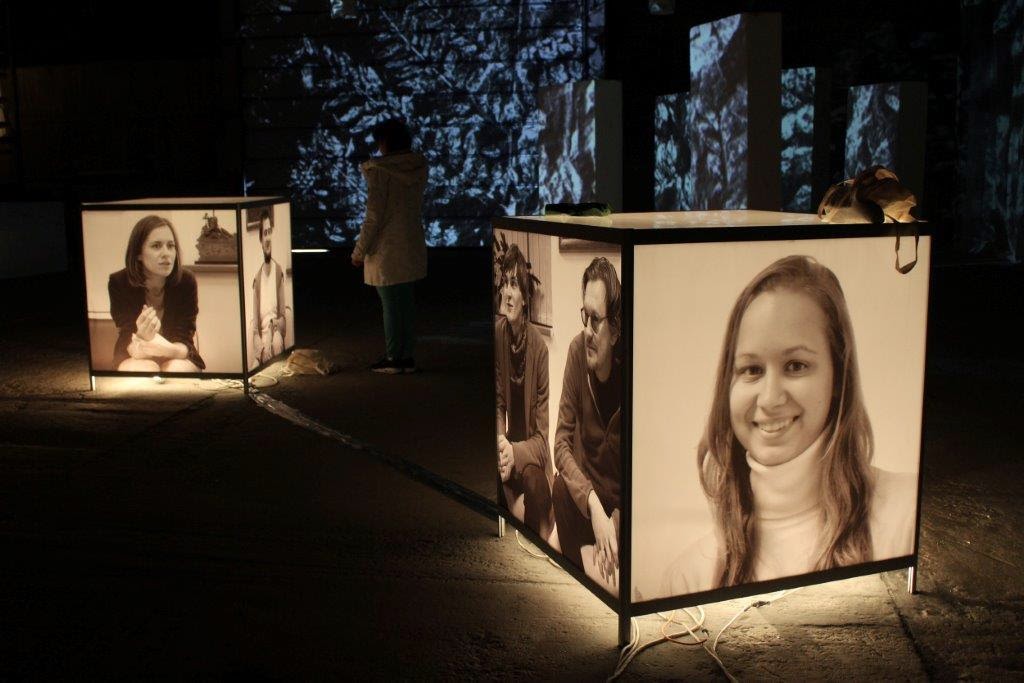 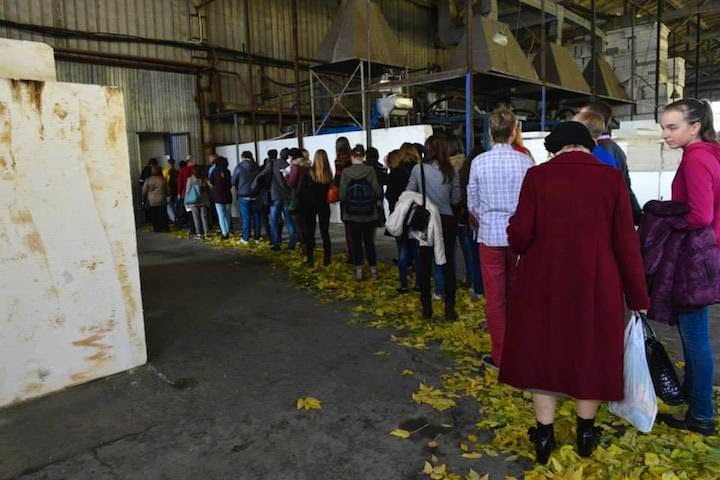 For our performance the audience walked on a path of yellow leaves and then entered one by one into a labyrinth of dreams. At the other end of the tunnel they came out into a large space lit up by a colorful projection. On one side were the lit up cubes with contemporary young people talking about their city. As the last of the audience entered the space we began our performance which stripped away the layers of time in the region. Donetsk was founded by John Hughes, an industrialist from Wales. Zhadan wrote a monolog for a Welsh engineer who arrived in the area in 19th century that revealed his dreams of building a new world in this area. Afterwards, there was a scene based on a story from Mediaeval chronicles about steppe nomads who lived in the region a thousand years ago. This led to fragments of poems about trees intertwined with ancient songs. Leaves fell for 150 million years in this area to create the rich veins of coal. The piece ended with a fragment of a poem by Zhadan:


What are dreams made of?
An idea of how things should be
An aversion to how thing are
Distrust in what’s offered
And a belief in what’s hidden from us.


Then the great gate in the side of the building opened and daylight filled our dream space… Over two hundred people attended our workshop production of Underground Dreams in Donetsk  on October 10, 2013. They loved it and we were invited to return in June to create a full production. 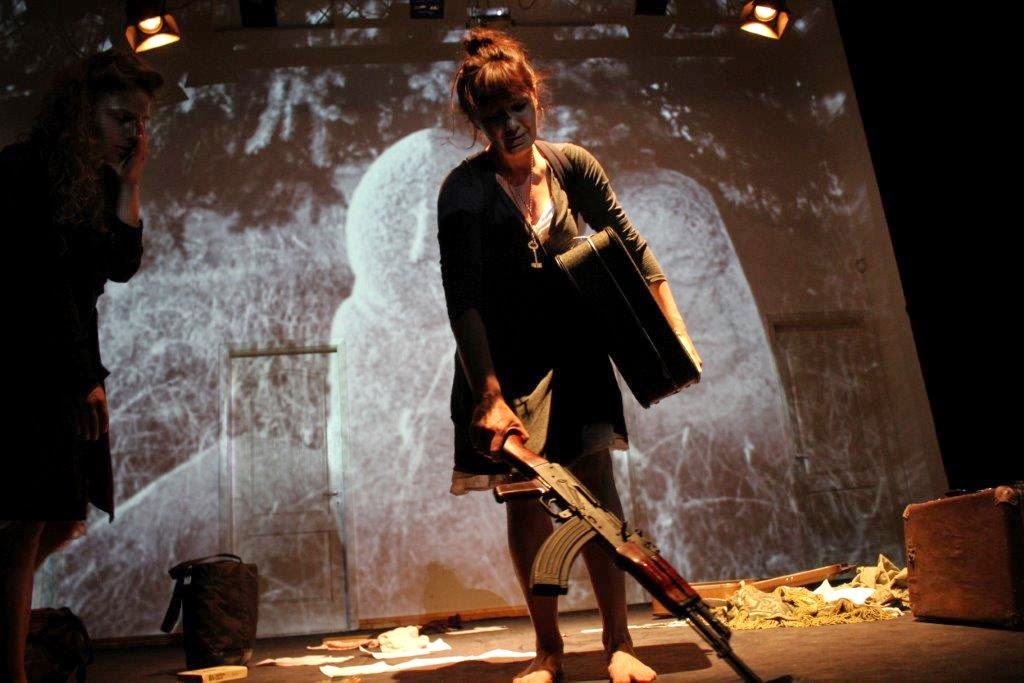 All winter we were glued to our computers watching the protests in Kyiv that led to the fall of the government which had been led by a corrupt president from Donetsk. It seemed Ukraine was given a chance to truly break with its Soviet past. In May a new president was elected.  There was a lot of hope, but it was soon dispelled  by the crisis in Donetsk. Terrorists supported by Russian President Putin  were determined to separate this part of the country from the rest of Ukraine.

I arrived in Ukraine on June 8, the day before terrorists captured the Izolyastia factory complex. The staff was allowed to leave with only some of the artwork and then the premises were mined.  Today, the war continues and hundreds of civilian hostages are being held there for ransom by one of the factions of the separatist army. 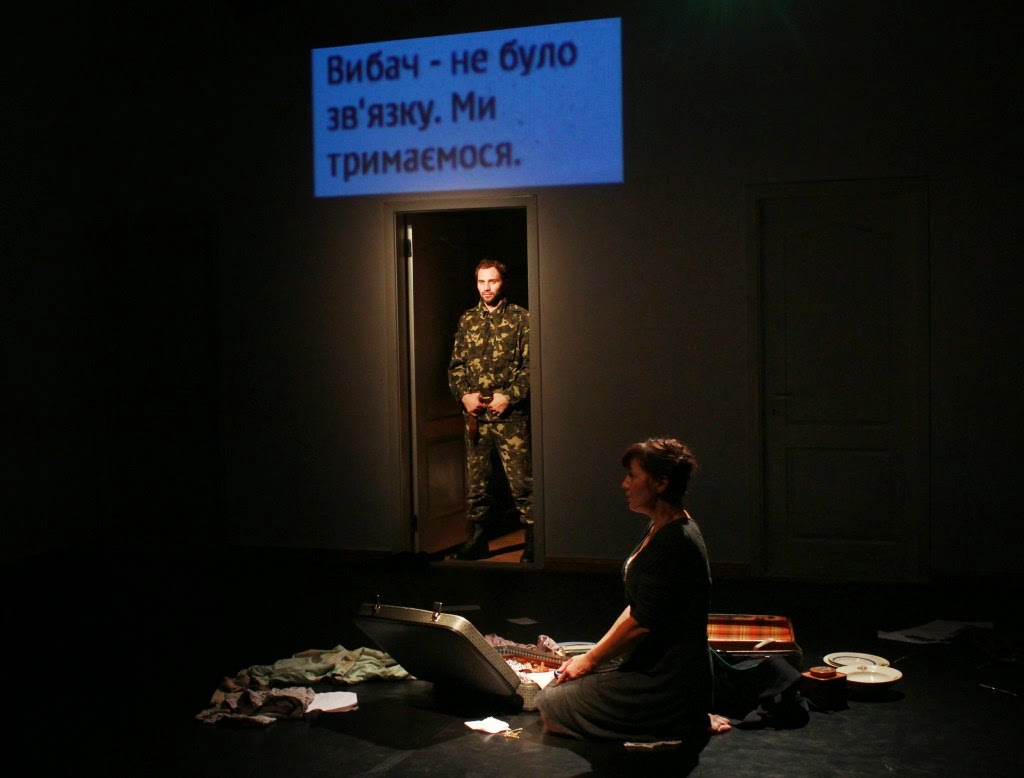 I met Luba Michailova in Kyiv and we decided to continue the Underground Dreams project in exile. Zhadan and I re-interviewed many of the same young people by Skype. Some were refugees in other Ukrainian cities, others were still in Donetsk. They told of morning commutes to work that meant enduring up to six searches at the armed posts set up by various factions. They talked of the difficulty of concentrating on work when people with guns ran past the window, the terror of walking through a totally abandoned downtown during lunch, the cold sweat induced by any loud noise once they had lived through a bombing raid. These interviews described the reality of war on very personal level.  We decided to include excerpts of these interviews in the show.

Our piece about the dreams of young people from Donetsk became about the difficult reality of their lives. The audience listened to these tapes as they walked through the numerous corridors that led into the main space of the theatre. They had to pass through a metal detector, sit in a cramped locked room, watch a woman try to pack all her belongings in two small suitcases, read projected phone texts to realize that the “good job” promised one of the characters was to fight on the other side.

Zhadan wrote poetry and monologs based on the stories we heard. One young man from the Carpathians told us he had built twelve large wooden buildings for a vacation complex near Donetsk. He showed us the pictures of the construction and then whispered the name of the place. We had all heard it. The place had recently been bombed and many people died. We found a video someone had posted on YouTube of the burning complex which we used in the show.  As the projected flames enveloped the wall of the theatre, the doors flung open and four young women from Donetsk who had been in our workshop, but  were now refugees in Kyiv, entered the space with suitcases. Tanya Hawrylyuk sang Zhadan’s poem.


We kept the scenes with the reverse history of the area, but now they took on much deeper meanings. What happened to the utopian vision of the new world in this place? The nomadic tale of sense memory inspiring a return home, now reminded everyone that they too wanted to return to their homes as they were before the crisis.  We repeated excerpts of the original interviews. They were so beautiful, so naïve, and truly unattainable dreams today.

We presented the new version of Underground Dreams at the Les Kurbas Theatre Center in July and were invited to perform in September at the GogolFest International Art Festival, held at an old factory complex in Kyiv.  The two performances were sold out. A reviewer from Donetsk wrote: Underground Dreams is such an emotional, powerful and deep piece, it is simply not possible to fill a performance with more pain... It is a good that they show the war and the situation of the refugees to people in Kyiv. People in other regions simply do not understand what it means to be a refugee – to be forced to flee from your own home.”

Virlana Tkacz is the artistic director of Yara Arts Group, a resident company at La MaMa Experimental Theatre in New York. She has created 25 original theatre pieces with Yara which have premiered at La MaMa and performed in theatres and festivals in Ukraine, Central Asia, Siberia, Mongolia, China and Canada. Her piece Fire Water Night was nominated for two New York Innovative Theatre Awards this year.