Astoria is Not That Far

x
Contributed by Guest Blogger of the week Tom Wojtunik.
I took over as Artistic Director of APAC in 2008. Next week we open the first mainstage in our 10thanniversary season, a remount of Joshua Conkel’s MilkMilkLemonade, featuring the original cast. It’s a terrific piece that had a critically acclaimed, though criminally short, run in the 45-seat UNDER St. Mark’s in September of 2009. Like all indie theatre companies, in addition to readying the physical production for opening night, we are also focusing on ticket sales, especially for the all-important opening weekend, when press attends and fates are decided.
APAC audiences tend to split in thirds: our core Astoria supporters, friends/family of people involved in that particular production, and Manhattan theatergoers. We can always count on the first two categories—it’s the third that can sometimes remain elusive. The argument we always hear, of course, is that Astoria is too far, that the commute is too much for people. So I’m going to shamelessly use this public forum to attempt to debunk that myth…
Astoria is not that far! I promise. I’ve lived in NYC for thirteen years, and Astoria for eight. I love it. It’s quiet and the commute is super easy. During the week, I can get to midtown in twenty minutes. Sure, weekends can be tougher, especially with MTA construction going on, but that’s a city-wide problem. Honestly, it took me longer to get places when I lived on First Avenue on the Upper East Side than it does now.
Hands down, the best thing about Astoria is the food. Arguably, Queens has the best in all of New York. A.O. Scott of the New York Times called Queens “demographically the most cosmopolitan of the five boroughs and something of a foodie mecca.” Artists who have worked at APAC in the past (and who don’t live in Astoria) often come back to the neighborhood to revisit their favorite restaurants from rehearsals.
Come see MilkMilkLemonade. You’ll have a terrific time at the show, and since it’s only 75-minutes, why not enjoy some Astoria-cuisine before or after the show? Here are some suggestions:
Sac’s Place
The best pizza in Queens, and a favorite of Al Pacino’s and David Chase (Johnny Sack on “The Sopranos” was named after this restaurant, a favorite of the creators during shooting). The ravioli are handmade every morning, but you also can’t go wrong with the pizza: 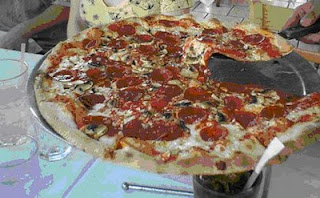 Sweet Afton Bar
Probably the coolest new bar in Astoria, with fun drinks (Dirty Pickle Martini!), great draft beers, and a limited but delicious menu. APAC is currently raffling off a $50 gift certificate to Sweet Afton—buy your tickets for MilkMilkLemonade by 12:00pm tomorrow (Wed 10/20), and you’ll automatically be entered to win! The cheeseburger alone is worth it: 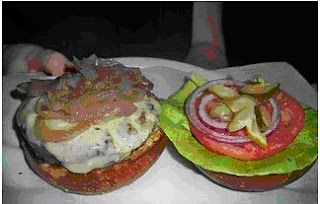 Vesta Trattoria & Wine Bar
An APAC favorite (we often have opening night parties here). Amazing staff and ambiance and terrific pizza, pastas and entrees. They have wine on tap, and if you tell them you’re going to(or just saw) MilkMilkLemonade you’ll get a free Baby Jesus Cake for dessert (it lives up to the name, I promise): 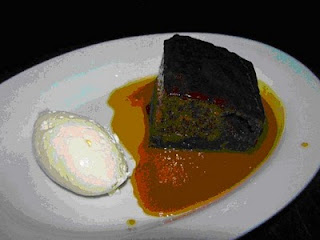 Hungry yet?
There is a lot of terrific theatre happening in the boroughs. Grow up. Get on the subway. Have an adventure.
MilkMilkLemonade runs October 28-November 13th. Buy your tickets here.
P.S. The joke about needing to get your passport stamped to leave Manhattan is tired. I’ll give two free tickets to MilkMilkLemonade to whoever comes up with a better one (submissions accepted on comments to this blog posting only!).
x
Posted by IT Foundation at 4:45 PM