About the Production
Project Y is an “outside-the-box theatre company” that experiments with mixed media storytelling.  Their production of Connected by Lia Romeo explores how we build relationships through social media. “A young girl’s most embarrassing moment goes viral; a high school student must choose between real life and role-playing games; two girls spend Saturday night endlessly searching for the ‘perfect party;’ and a teacher is accidentally seduced by her student on an internet dating site.”

Director Michole Biancosino, Playwright Lia Romeo, and Ensemble Members Robby Clater, Ella Dershowitz, Midori Francis, Thomas Muccioli, and Aria Shahghasemi share what is was like to explore how we engage and disengage from social media.


What attracted you to this production?

Lia: I was initially commissioned to write the play by a theater in St. Louis. They wanted me to write something that dealt with social media. So I did a lot of thinking about social media and its effects on society. I ended up realizing that it's not a simple thing - it's not just positive or negative; like most technologies, it has really different effects depending on the circumstances it's used in and the people who are using it. That's what inspired the four-part structure of the play. It had a great production in St. Louis, and then a reading with Project Y as part of their TechnoPlays reading series in 2014. When Michole Biancosino told me she wanted to do a full production in New York I was thrilled; Project Y is a fantastic company and I knew the play would be in such good hands.

Aria: It started with the script. The characters were fun to read, the story was fun to follow so I thought I'd have fun being in the production. 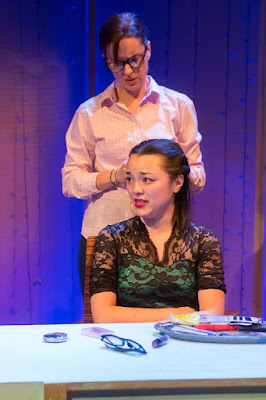 Ella: I love, love, love Lia's writing and Michole's direction. From the moment I walked into the audition room, everyone was so open to playing and figuring things out and having fun. I felt like they didn't have preconceived notions, and really wanted to see our versions of these characters, which I loved. I have also always been fascinated by coming of age stories, and stories about the high school years. I was not such a fan of high school when I was actually a student, so I really loved the idea of getting to go back and do it again, especially as two characters that had such different places in the high school ecosystem. I also love that, because there are so many different characters - all of whom are complicated and unique - everyone would identify with this play in some way.


Midori: I was intrigued by exploring the theme of technology and its influence on how we relate to one another and how it is changing our ideas of connection.

Thomas:  The influence of technology on our society. This new generation grappling with identity and societal pressures.

Robby: I felt like the Book was strong, and that's very important to me. It was written very naturally so it was easy to sympathize with all of the characters. It also allowed the piece to get its points across without needing to "push".

Michole: Connected is all about technology and social media and how it makes us feel more lonely even though it is supposed to bring us together as humans. Playwright Lia Romeo poses the question, "If we are now all more connected than ever, why do many of us feel so alone?"

Michole: Connected was a hugely popular hit, with almost every one of our 20 shows at 59E59 Theaters sold out. We loved watching the ensemble of 8 actors get to play different characters in each vignette, and how the audience responded to that. We also had a bunch of very young actors in the play - many of them were playing high school students - and so the energy of the production was incredible. This show was also laugh out loud funny - the audience loved these outsider characters, each of them struggling to fit in, find love, find a friend, and be "normal."

Lia Romeo is my favorite playwright writing for the theatre. Her writing is so unique - you feel like it is just how people talk, and yet it isn't that. She writes poetically but it feels raw and real. Her work is also dark - so dark - but unexpectedly so, as the audience is laughing, having such an entertaining time, that they have no idea what they are in for.

Aria: The people. My castmates are some of the most interesting and entertaining people I've met since moving to New York. The crew was incredibly good at their jobs and it was pretty cool to get to work with what they gave us.

Ella: I LOVED playing three really, really different characters. This is the first time I've ever played more than one person in a play, so that was just incredibly fun. I've always loved the part of acting that is about make believe and transformation and imagination, and this show was the perfect playground for that.

Lia: It was wonderful to be able to be involved with the rehearsal process from the beginning. When the play was done in St. Louis, I just showed up on opening night, and so it was great to get to see the New York cast work through the play over time. I was able to make some changes and polish the script in rehearsal, and it was inspiring - and also a lot of fun - to be able to spend time with such a great cast and director and see them bring this world to life.

Midori: My cast! They were all so talented and wonderful. It was truly a joy to hang out with them every day.

Robby: I loved the rest of the cast. They were all so talented and kind so it was easy for us to trust each other and let the piece flow.

Thomas: Being a World of Warcraft dwarf and the research involved. Trying to understand why these gamers choose fantasy over IRL.

Michole: There were so many moving parts - including a set that moved around as well as projections and videos - so putting all the pieces of the giant interconnected puzzle together was fascinating. We also had an entire scene that was based on World of Warcraft - full cosplay costumes and staging - so it was a tricky balance of what to put onstage versus what to have as multimedia.

Lia: Honestly, I didn't find anything about the process particularly challenging. I was really happy with the cast and had a great working relationship with the director, and so I was just enjoying the ride.

Thomas: The scenes set IRL (in real life) were probably the most challenging. The video game scenes were a piece of the cake, though the quick change was always stressful. Gay teen one minute and a bearded dwarf the next. The reality scenes were difficult because they required a sensitivity that these characters rarley engage in. They are constantly engaged with their phones, games and apps rather than the people sitting in front of them.

What was the weirdest thing about working on this production?

Aria:  The integration of World of Warcraft. Having a game like that used in a professional production I got to be a part of was awesome.

Thomas: I mean I mentioned it already but the vignette I was in by far was the most innovative. The Cosplay was on point: Night Elves, Dwarfs, and Warriors of World of Warcraft. Also, swinging a flail weapon every night was fun and a little violent.

Ella: Yes! I played a World of Warcraft addict, and another actress played my avatar. The Warcraft scenes came to life! There were awesome projections, lighting, costumes, and weapons, and the coolest part was the actors playing avatars incorporated the physical vocabulary of the game into their blocking. And I mouthed my avatar's lines in sync with her. I wish I'd gotten to see those scene (well, the whole play actually!) from the audience because I bet it looked pretty trippy and awesome.

Michole: The audience loved the actors so much. They would all in unison say "awwww!" or "oh no!" as they rooted for each of them. People told me afterwards that they had "fallen in love" with this or that actor.

Lia: Since the play deals with social media, we wanted to integrate social media into the audience experience, so we used kind of an innovative technique - there are four parts of the play, and then the company had me write a fifth part which existed only online - we filmed the scene and it was available on Project Y's website during the show, so the audience could go online and continue their experience of the play outside of the theater.

What was it like working with Project Y Theater?

Ella: It literally never felt like work. We all were - and still are - kind of obsessed with each other. The fact that the show is so fun allowed us to have so much fun, and the fact that our characters are in those vulnerable high school years and are all so honest and complicated and weird allowed us to be our strange and crazy selves from day one. Also, Michole and Lia both gave us so much creative independence with our characters, and let us take all sorts of risks and do weird things and make these people our own. And yet, every single direction or note they gave ended up being the perfect solution / the key to it all.Aria:  Project Y is good because they're driven by what they want to see. They produce what they'd be interested in so it's always interesting to audiences.

Lia: I love working with Project Y. They produced another one of my plays four years ago, and I've also been working as the literary manager of the company for the past two and a half years. It's hard to pick one "best thing" - Project Y has given me a theatrical home in New York, and I'm so grateful. But if I had to pick one thing, I guess I'd say that I always know I'm going to get a really high-quality reading or production. Being a playwright means trusting your work to others - often strangers - which can be really nervewracking, but when I work with Project Y there are no nerves involved - I know they're going to bring my play to life in a way that's true to my vision for it (and often even better than my vision for it), and so I feel really comfortable and secure.

Robby: There was a lot of freedom in the rehearsals, or at least it felt like there was. It's one of the advantages of working with a strong Director, great writer, and intelligent actors. We could all feed off of each other to create something meaningful and organic.

Thomas: Project Y and the folks at 59E59 take care of their performers. Both artistically and logistically they ensure the actors can fully delve into the work.