Boys of a Certain Age

About this Production: Ira and Larry were Hebrew school classmates who took different paths in life. Ira came out and moved to the city; Larry got married, had a family and came out later in life. Now, following the 2016 election, they're spending one memorable weekend together with Larry's son Bryan, Ira's nephew Christopher and a whole lot of gay history.

Dan: I had wanted to write this story for a while. There are so many guys that I know who survived the AIDS epidemic and are now experiencing all of the pro-gay changes of the last few years. I thought that was a very unique vantage point, that wasn’t being represented. At the same time I also wanted to write something about the debates I had witnessed about the definition of gay identity occurring with younger gay men; whether or not it was acceptable or self-hating to put terms like “masc” in your Grindr profile and so on. I had written maybe 10 to 15 pages of each, but it didn’t really go anywhere because there wasn’t enough conflict. Then one day I realized that by merging the two ideas there could be a very interesting perspective. It also allowed for a number of unique differences and unexpected agreement between the four men.

R. Scott: I was very excited for the chance to work on a new play with the playwright in the room.

R. Scott: The family feeling the four actors created among ourselves.

Dan: We expected we'd have some, but we had A LOT of older gay men who saw the show and came up to us after or emailed us or posted on social media about how the experiences of the older guys in this show mirrored their own lives.It was very overwhelming to meet so many real life Iras and Larrys and hear them say we got it (mostly) right. It was also very nice that a number of actors like Jack Weatherall and John Benjamin Hickey made it to the show.


What was the most challenging part of working on this production?

R. Scott: The biggest challenge was purely a technical one: moving into the theatre only 2 days before the first audience arrived.

Dan: We were homeless for a bit. We did the show at the Fresh Fruit Festival in 2016 and rented Soho Rep's Walker Space for the fall, originally planning on opening around Election Day. We had just announced our show and like two days later they announced that they were closing because they apparently (despite decades of productions) did not actually have the right certificates. It turned out to be a god send because we found TheatreLab and our show would likely not have found a the same enthusiastic audience after the election results. 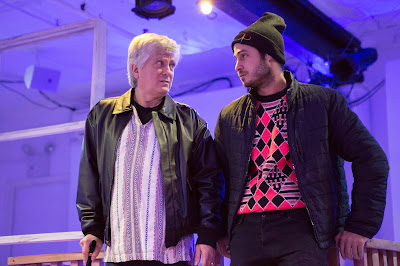 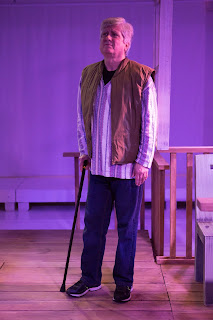 Dan: It was very enjoyable watching the actors interact. Our rehearsal room was full of education. The younger guys helped the older guys create websites and explained things like Grindr and the older guys told us about the original production of Evita and going to gay bars to watch The Golden Girls on a big screen TV.

R. Scott Williams is a wonderful actor and a great guy who had been working for many years all over the country usually in classics. Boys was very different from his usual work and he told us numerous times how much he was enjoying creating a new work.
It was a wonderful experience and something I'm extremely proud of.

Posted by IT Foundation at 5:27 PM