How Off-Off-Broadway got me across the Atlantic

x
Contributed by guest blogger of the week, Kathleen Warnock.

Greetings! You may call me the Ambassador of Love for North America. I even have a plaque that says it (actually it says “Ambassador for International Dialogue,” but I used my diplomatic powers to change the title).

As I ride in my ambassadorial sedan chair down to Zuni, waving at my colleagues, stroking my elbow-length ostrich-skin gloves, I pause and think back…back…to the middle of the last decade.

Twitter hadn’t been invented yet, and many people who have broken their limbs in Spiderman: Turn off the Dark hadn’t graduated from college! In a small theater on W. 43rd St. (no, not Roy Arias; no not the Mint; no, not Milk Can…), Emerging Artists Theatre produced my play, Rock the Line. (This, after TOSOS had given me a reading of the play in its Robert Chesley/Jane Chambers Playwrights Project). 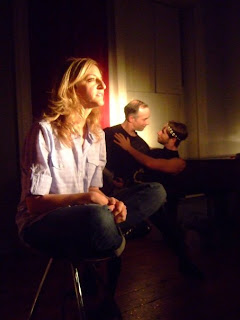 Rock the Line went on to be published by United Stages, and to win the Robert Chesley Award for Emerging Playwright, accompanied by a nice check.

“Let’s go somewhere!” I told my partner. “Where would you like to go?”

“Ireland!” she replied. “I’ve always wanted to go there.”

I googled “gay” “theater” and “Ireland,” and on the weekend we were going to Dublin, there was an International Gay Theatre Festival! When we got there, I found the festival office and introduced myself. I went to a panel on gay theatre the next day, and heard the scholars discuss the Caffe Cino and Lanford and Doric Wilson…(“Hey! I know him!” I thought). I began to make a list of people who needed know about this festival.

One of the plays we saw was I Know My Own Heart, by Emma Donoghue, and I said, "We need to read this play at TOSOS." Emma said we could read her play at TOSOS and we had a jam-up reading at Chesley/Chambers (andI still want to see a full production of it…it could be done very simply & well in a small space…)

I had another play done at EAT, a one-act called Some Are People, based on a 10-minute play I wrote for a 24-hour festival down at Wings Theatre. Some Are People might make a good candidate for the Dublin festival, I thought, and suggested to Paul that EAT apply. So we did and included two short plays by EAT playwrights, Kevin Brofsky and Matt Casarino, which we figured would be a good evening to show our range.

The festival required no application fee, they provided housing, and the visiting companies got 70% of the box office. (Remember, this was before the financial collapse, when Ireland was one of the richest countries in Europe).

We were accepted, and managed to raise the dough for airfares, and flew all night and got there in the morning and immediately went to tech (in two theaters…the festival had decided to present Some Are People

I refrained from going to see my own play every night, and tried to see every other show, which ranged from Slipping by Daniel Talbott, presented by the Side Project of Chicago; Corpus Christi by Terence McNally, presented by 108 Productions of Los Angeles, Confessions of a Mormon Boy by Steven Fales, and Love Scenes by David Pumo, performed by Moe Bertran. (I hadn’t seen Steven or David’s plays in New York, where they originated, but finally got to see them in Dublin). We had a grand time at the gala, and everyone promised to stay in touch, and we flew home again.

We DID stay in touch. I loved Slipping, and was astonished to find out it hadn’t been done in NYC yet. So I found Dan Talbott on Facebook and said: “Hey, do you want to read it at TOSOS?” And we did…and it was a step on the road to the off-Broadway production. Steven Fales said: “I’ve got a new piece I’m working on, Missionary Position…could I give it a read at TOSOS?” And he did, prior to its Fringe run and national tour. The Corpus Christi folks wanted to bring hteir show to New York, and the Dublin buddies pow-wowed via phone and email, and Corpus got invited to do the show at Rattlestick, and the Dublin/New York connection turned up spare rooms and sofa beds for the actors to sleep in.

We also read The Countess and the Lesbians at TOSOS (I’d love to see a production of that in NYC as well!), and the people who’d been to Dublin continued to pull their friends aside and say "here’s how it’s done."

When the next festival rolled around, I had a short piece I wanted to send over…and so did J. Stephen Brantley, another EAT playwright. I asked if I could use his 2-man cast to double in my 3-character show, and they were up for it, and we sent them in. TOSOS, in the meantime, had had a run of Chris Weikel’s Pig Tale at Wings, and decided that we should send that gay fairy tale over to the Ould Sod (no, the Ould Sod isn’t Doric!)

EAT and TOSOS both got in it was some seat-of-the-pants, DIY theater at its best. The Off-Off crowd didn’t really break a sweat. We just went out and bought a bed, and borrowed a mic stand, and changed the staging to fit the room. We made new Friends for Life, and ran into other folks from our  neighborhood, so to speak. Elizabeth Whitney did her Wonder Woman one-woman cabaret (a revision of a piece she’d presented at TOSOS a few years befor), Moe Bertran was back acting in Pig Tale and we’d just missed (but heard great things about) Dan Bernitt, who along with Carolyn Gage later won the Chesley Award. Careful by South African playwright Fiona Coyne moved me, and I talked her into sending me a copy so we could read it in New York, where Fiona had never visited. (Fiona passed away last year, never having been to New York, but we WILL read her play.) Elizabeth Whitney brought her Wonder Woman show to EAT, complete with invisible airplane.

I didn’t have a chance to go to the festival in 2010 (though some EAT people who’d gone the first year put together a production that did very well), in part because EVERYONE IN THE WORLD IS BROKE NOW, but I did help put together a benefit for our friends, whose own economy was in the giant crapper. All I had to do was say “Dublin” and people were there. Paul Adams donated the EAT theater space for a night, performers ranging from Dan to Moe to Elizabeth, and the casts of the two short plays we’d sent over the first year performed, Chris Weikel MC’d. Mark Finley dircted. Jen Russo and Terra Vetter stage managed and ran the board. Brendan Fay of St. Pats for All came and said a few words on behalf of his homeland and adopted country, and I asked LGBT writers I know if they’d donate a signed copy of one of their works for a raffle. Every one of them did.

We raised about a grand for our friends in Dublin…not a huge amount in the grand scheme of things, but they appreciated it. They were no longer able to offer free housing, and were worried they couldn’t get as many and varied groups whose work needed to be seen over to Dublin. But they made it happen in 2010, and will continue this year. They used the challenge as an opportunity to bring in more Irish writers, and young writers and theater groups. And this year, they’ve gotten funding from the equivalent of their arts council, and will keep going.

I don’t have a piece over in Dublin this May, but I’ve been pulling people aside and saying: “Hey, you should go there!” and giving my considered opinion on what to put in and how to help pay for it.

If you’d like to find out more about the festival, visit www.gaytheatre.ie, and remember the application deadline is in December every year.

Now I will ride my chariot back to the lyrical County of Queens, and attempt to get some beauty sleep in order to be upright and functional for the dayjob, which pays for my Ambassadorial adventures.

Happy St. Patrick’s Day! This year, come hear Dan Bernitt (yeah, that guy), PE Nolan and Eddie Sarfaty at Drunken! Careening! Writers! on Thursday, March 17 at KGB Bar, 7pm FREE. You may buy me a drink. on its own, and include the two shorts in an evening of short plays in the drawing room/theatre of a beautiful Georgian mansion).
x
Posted by IT Foundation at 9:41 AM