A Place To Create

Contributed by guest blogger of the week, David J. Diamond. 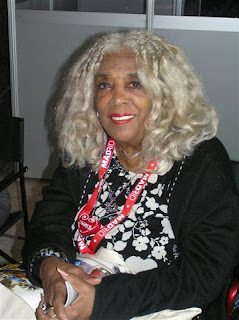 “I’ve always wanted to make a way by which as many young artists as possible could travel to Europe, or Asia, or wherever. I think it’s the best thing for developing the artists, particularly the American artist. I think in world terms. I believe we are one race, and everybody is in that race. And one day we are going to learn to trust what is within us, so that we can be in tune with the world, the earth, the moon, the stars, the universe.”

The whole point of having an international symposium in Italy every summer is to challenge artists to think about the act of creation in new ways. When they bump up against different ways of working, ways of thinking about what theatre can do, ways of reaching an audience, they become more substantial artists themselves. It’s not easy to describe what happens to the artists who experience a summer at La MaMa Umbria. They are definitely changed. I’ve never been involved with a program that has generated as much gratitude from participants for providing them an opportunity to grow as artists and as people. And we have a lot of fun. That is key to the learning.

Participants talk about how well they are taken care of at La MaMa Umbria. That is Ellen’s legacy. We prepare and serve the meals, which are expertly prepared by our beloved Elisa, with many ingredients coming directly from our garden and orchard; we clean your room, even do your laundry. We provide an environment that provides the maximum opportunity to focus on the creative work. And then we bring together extraordinary, working professional theatre-makers who are also gifted teachers to share their perspectives and engage the participants in active, participatory exercises that force them to “try on” new techniques. For eight hours a day, the participating artists stretch and learn and grow. Then there is time to share with each other informally. Living and working together, you get close quickly (if you want to) and you can engage iconic masters in one-on-one conversations about life and art. 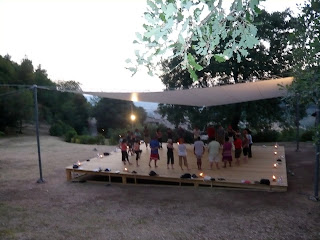 La MaMa Umbria is tucked away in the hills surrounded by olive groves and vineyards, farms and forests. Yet it is close enough to the greatest cultural treasures to be found in Italy, that we can’t let you get away without experiencing the art and culture of this unique part of the world. Spoleto, the nearest town, is home to one of the great arts festivals of Europe: The Festival of Two Worlds. The town boasts theatres from four centuries, which are still used today. Dance troupes perform outdoors at Teatro Romano, the Roman theatre from the 1st century; operas are done at Teatro Nuovo (the “new” theatre, that is, 19th century). There’s also a 17th century opera house called Caio Melisso and “black box” (which is actually a stone box) below Caio Melisso, called Teatrino delle Sei (the Six O’Clock Theatre) for more experimental work. Many other spaces from churchyards to movie theatres are also used as performance venues during the Festival. The Spoleto

Festival was begun by Giancarlo Menotti (the opera composer) 55 years ago, and run by him until he died a few years ago. It attracts the worlds top musicians, dance troupes, theatre companies and visual artists.

We insist on taking everyone who participates in La MaMa Umbria programs to Assisi to visit the Church of St. Francis, where some of the greatest religious frescoes in the world adorn the walls (by Giotto and other artists). We can also see the Church of Santa Chiara, named for St. Clare, a follower of St. Francis, whose order of nuns were called the “poor Clares” on account of their pledge of poverty. This is the church that houses the crucifix of San Damiano, which supposedly gave Francis a signal that he should give up his errant ways and devote his life to worship and good deeds. We also visit the Umbrian hilltowns, Orvieto,

Perugia (especially during the great Umbria Jazz Festival), Deruta (to see the ancient art of ceramic-making, still practiced today) and others. We may have a wine-tasting at one of the vineyards on the Strada di Sagrantino and tour the wine-making process which combines modern technology with ancient ways.

Yes, we drink a fair bit of wine and eat our share of gelato (my particular weakness.) But the focus is always on the creative process. This summer, we are offering our most ambitious program yet. [www.lamama.org/programs/lamama-umbria-international.html] Our 12th Annual Symposium for Directors brings together the talents of Ping Chong, Ruth Maleczech, Luca Ronconi, Dijana Milosevic, Baba Israel, JoAnne Akalaitis, Dorcy Rugamba and others. Dorcy comes from Rwanda, where much of his family was killed in the genocide. His response was to create a six-hour play with a cast of 40 which played the Avignon Theatre Festival and toured for the next four years. Dijana is artistic director of Serbia’s DAH Theatre, which is celebrating its 20th Anniversary this year. Luca is an iconic star of the Italian theatre, having run the Piccolo Teatro in Milan, the Venice Biennale and other theatres. Ruth Maleczech will take a look at American classic texts from her Mabou Mines-inspired experience. Ping shares his techniques for combining movement, text, sound, space and image. 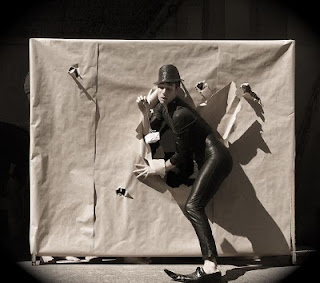 This is the 5th year we are providing a space for playwrights during the Playwright Retreat. Facilitated in the past by Lisa Kron, Naomi Izuka, Chuck Mee and Lynn Nottage, this year we are lucky to have Erik Ehn, head of playwriting at Brown University as our teaching artist. In addition to learning from Erik, the writers have lots of time to write in the serene, pastoral environment of La MaMa.

We have two new programs this year: The First Annual Master Acting Workshops and Cricot-2 Workshops. Cricot-2 is the company founded by Polish master director, Tadeusz Kantor. Kantor and Ellen Stewart were very close friends. His major works had their US premieres at La MaMa in New York. I remember seeing a couple of them in the later years: The Dead Class was particularly haunting to me. Kantor used to direct the actors while sitting on a stool onstage with them DURING the performances. While they were dragging themselves across the stage portraying Easter European war refugees, he would yelling at them. It was extraordinary. (He spoke in Polish, so I was never sure what he was saying.) After he died, the Company came back to La MaMa without him, but the empty stool sat there during the performance, just as before. Haunting.


Our Master Acting Workshop will be led by two great artists: Tina Landau and André De Shields. Tina’s work with The Viewpoints and composition will compliment André’s intense physical and vocal work. Both artists have long associations with La MaMa. André’s Cotton Club revue remains of highlight of my La MaMa theatergoing experiences.

We encourage you to check out our programs and get involved. The experience is bound to affect you in untold ways. Here’s what one participant had to say about her time at La MaMa Umbria:

“The month that I spent at La MaMa Umbria gave me the most precious thing that you could give to an artist: time to think.  It was great to get away from the business of theatre and really delve into what theatre meant as an art form.  I remember those early mornings stretching on the field overlooking the valley below, later meeting and talking with other participants in our workshops about life and art.  This wonderful mixture of solitude and interaction really gave me space to breathe and inspired me to continue creating.”
-- Stacey Christodoulou (2008)