Contributed by guest blogger of the week, Jonothon Lyons. 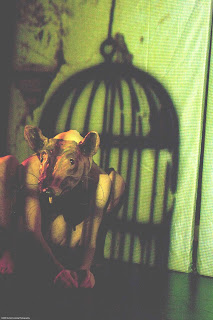 The mask theatre productions from Imago are not specifically geared toward children but are family friendly none the less. After a couple years performing these shows for predominately young or family audiences I became interested in the possibilities of mask performance for an adult audience.
My initial idea was a giant rat. I pictured a large mask that I could wear over the top of my head while squatting down in a contorted position. I didn't think far beyond the mask itself for a long time as I had never constructed anything and didn't know what materials to use or how to go about it.
In the Spring of 2009 I had the opportunity to stay in Portland a few extra weeks before returning to New York. I stayed with a friend in his spacious artist live/work space in the industrial district. After one day of doing nothing but smoking cigarettes, drinking beer, and watching snowy rabbit ear television I knew I needed to take on a project or it was going to be a depressing couple of weeks. I asked everyone from the theatre for advice on mask building and went to an art store the next day.  Equipped with everything I needed to papier mâché and an enormous block of clay I set about sculpting the face of a naked mole rat.
I was instantly fascinated with the process of sculpting. If something started to look strange I could just add more clay or smooth it out and start over. I have never studied art but I did model for life drawing classes in college and picked up information along the way. I knew to keep checking in with the source image I was tying to recreate and also to constantly realign myself with what I was making to it wouldn't become lopsided or disproportionate.

When I finished the sculpture and started layering the papier mâché I was very pleased with how well it had come together. It was a wonderful feeling to have finally put together this object I had been imagining for so long. As this was my first experience with a visual rather than performative art I was struck by a profound difference between the two: performance is ephemeral, visual art is permanent.
My whole life I had put so much time and energy into the work I did but the results of that labor could only be seen during the few short times a performance was happening. Suddenly I was holding this object that represented so many hours of work and creative energy that I could show to anyone at any time. 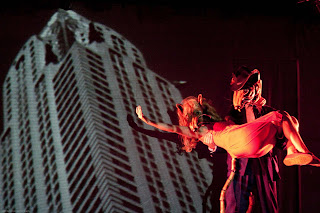 What continues to excite me now about the types of theatre I'm involved in, mainly mask and puppetry, is that they are a crossroads for performance and visual art. A puppet or mask is often a beautiful sculpture in and of itself but it also comes to life under the temporal circumstances of a performance.
Now that I finally had the major physical element I needed, I started to put together a context for the rat. It started as a short piece that I thought would be maybe ten minutes long.
A man sits alone in his apartment eating from a bowl. He is approached by a giant rat. They face off and he catches the rat in a cage. On his way to the door the man mysteriously falls over dead. Time passes and the rat breaks free of the cage. The rat approaches the man's body and begins to eat it. When he is finished eating the clock strikes twelve and the rat stands up, becoming the man. The man/rat sits down and continues eating from the bowl. 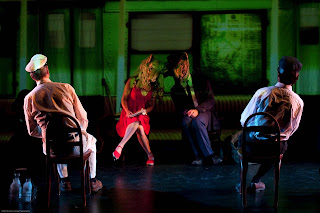 Not long after I had finished the mask I received an email from Ximena Garnica asking if I wanted to present a short piece at an upcoming event for students of the Cave butoh programs. It was a perfect opportunity to get this project together so I told her I would love to. Without an external deadline I don't think I would ever get anything done.
One benefit of this piece is that it required very little in the way of props or set. The only major scenic element required by the initial concept was a giant cage for the rat to be caught in. I had also been playing with the idea of incorporating some kind of projection into the piece like a window to the outside world. While I was trying to work out how to construct and rig a giant cage from the ceiling at Cave my brother suggested we simply project the cage onto the wall. This proved to be a pivotal realization for the future of the show.
I was very lucky at the time to be living with my close and long time friend Daniel Brodie, who happens to be a rather experienced projection designer. When we realized the cage could be projected we decided to project as much of the set as possible. The original short piece featured the cage and a clock projected on a solid wall upstage, and a door projected onto a curtain through which the characters could enter and exit. 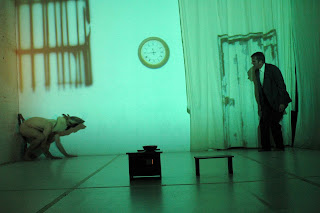 It was exciting how effective the projection of the cage became when it dropped down onto the rat. Because the image was actually being projected on top of the actor it really played up the illusion that he had been caught inside the cage. The other unexpected impact of the projections I really enjoyed was the effect on the door. Even though the audience was aware that the actors were pulling a curtain aside for their entrances and exits, it still felt very much like they were using the dingy water logged wooden door that was projected upon the curtain.
Soon after that we applied for a spot with HERE Arts Center's Autumn Artist Lodge and were accepted. We planned to expand the length of the show to about a hour, add two characters and several locations, and had about twenty days from finding out we were accepted to loading in. I was able to scrape together about six hundred dollars with which to produce the show.
I began writing a script for this longer version much like the example I gave earlier. I would describe the stage action in as much detail as possible and include my thoughts on what would be projected and what music or sounds should be present. I found myself writing in a screenplay format because so much of the script was visual and it felt natural to describe the transitions as fades or cuts.
For promotion we went into Times Square with the rat costume and I ran around in the street while everyone else filmed with their cellphones or flip cameras. We didn't know how people would react but soon we found if I stayed in one area for a bit a small crowd might gather. I didn't do much other than rush toward people to scare them or have the rat drink from a puddle so we were pleasantly surprised to find that people remained interested. The most amazing thing that happened that day was that I was confrontedby a dog.  He passed by with his owner then turned and squared off with me. When I started toward him he began barking. We felt like that was the ultimate validation of the success of the mask, confusing a fellow animal.
One of the most exciting elements to watch come together were Brodie's projection effects. We once again played the show against an entirely projected backdrop but this time built a specified frame with two symmetrical doorways cut into the drop. The characters would exit through a door in the interior of a location, then enter through the same door after the projection had become the exterior of that same location. We also had subway scenes in front of a projected cross section of a subway car with the tunnels passing by in the windows.
Because we were unbarred by any physical set pieces outside of a table and a few chairs we were able to create a wide array of diverse locations in a very small space.
Ultimately the run of the show was a bit melancholy as we had a difficult time getting people out to see it. With such a short development period we also knew there was a lot that we could improve upon with more time. In spite of those feelings, however, the show did grow quite a bit over the course of it's ten performances and by the end we knew we had created something pretty interesting.
Though remarkably stressful, it was also incredibly rewarding to finally produce my own work. It has also proven helpful in finding other work as a performer as I have been asked to submit material for auditions and before this I didn't have anything to send in. It was a huge learning experience and I feel much more prepared for the development process on the next project. It's also my hope to one day bring back The Tenement so that we can perhaps share it with a larger audience.
Thank you for reading my blog this week. Tomorrow I'm going to write just a short conclusion for the week and a little bit about my experience of joining Blue Man Group.
Posted by IT Foundation at 2:59 PM