Becoming a Playwright at 73: Getting Produced, Getting Published

Contributed by Guest Blogger of the week, Jack Hilton Cunningham.
To quote Steven Sondheim, I career from career to career.  At first I thought I might be an actor but in grad school I discovered, and all on my own, that I was not.  Then I decided directing was where I should focus.  I took my first course in set design and I put aside my foolish notion of becoming a director and became a designer.  I briefly returned to directing at SoHo Rep many years later.  I designed for about eight years; opera, regional theatre, summer stock, and Off-Broadway.  Then along came our daughter and I needed a job.  One fell into my lap:  John Wiley & Sons, Inc., textbook publishers.  So for 22 plus years I worked in publishing.  From time-to-time during those 22 plus years I designed a show or two.  After my retirement from the textbook industry I careered into desktop publishing until that industry diminished and then faded away almost as fast as it had appeared on the horizon.  OK, so I went back to stage design.  By this time our daughter Heather’s Retro Productions was on its feet. I, along with my wife, Rebecca Cunningham — renowned author of the leading textbook on costume design, The Magic Garment — also retired, began designing in earnest once again.  But wait, then I careered into yet another career:  playwright.
I had always wanted to write.  In my college days I tried my hand at poetry but was a dismal failure.  When I retired I wrote a novel — I did manage to complete it but did not manage to find an agent.  These days one cannot publish, or find a publisher, without an Agent; publishers no longer accept unsolicited manuscripts.  So now I have a 300 or so page novel, unpublished, on the shelf.  I told myself, “Give up, face the fact, there will be no career in writing for you.”
I’m retired so why not just settle back, enjoy life, and watch television, since I don’t play golf.  While watching a wonderful documentary about nurses in the Vietnam War, a light bulb came on over my head. Several of the nurses’ stories touched me. I told my wife that there was a play there somewhere. I began mulling it over and over in my mind and decided to work on the idea.  As I began work, I realized that my idea was far too limited for an evening in the theater.  As I began to do research on the Internet I stumbled over a group of letters written by a WWII soldier to his family.  Another light came on over my head and the full scope of my play, Women and War, began to materialize. I tried contacting the owner of the letters for permission to use them, but did not receive a reply.  I continued to search for more letters and I discovered that there were almost no extant letters written to servicemen during the wars of the 20th Century.  I decided to write the letters myself.  As my research continued, I unearthed stories of women like the Hello Girls of WWI, the Mother’s Movement, and the Doughnut Girls of WWII.  These, and other stories seemed a good way to round out the nurse stories and letters to and from soldiers/officers to their sweethearts, wives, and mothers.
I began work on Women and War in 2006. I wrote and rewrote.  As a matter of fact I over-wrote.  I had enough material for several plays.  I asked Peter Zinn, a director for Retro Productions, to read it.  He liked it.  As the producer of The Bleecker Street Theatre’s Monday Night Play Reading Series, Peter offered to produce it in an open slot.  We gathered a number of Retro’s actors, plus a few others for it’s premiere reading with an audience.  It was a bit heavy, much too long, and employed too many actors.  Peter encouraged me to cut some of the monologues, pare down those remaining and shuffle the entire script like a deck of cards — to reorganize, reorganize, and reorganize again.  He was right — it really began to work theatrically.  In 2010 Retro Productions produced it in repertory on Monday nights.
I was humbled when audiences told me that Women and War was important material not only for young audiences but for all ages.
I seemed to have a new career; one that I had not planned for — playwright.  I decided that since so many people were complimenting my play I would submit it to publishers.  I sent the manuscript to four of the top play publishers.  Before long I received a reply of interest from Samuel French.  I did not hear from the other three.  The editor who had read the script came to the last performance of the Retro production at the Spoon Theater.  I was offered a contract by Baker’s Plays, an imprint of Samuel French.  Before I knew it, I was a published playwright.  The Bleecker Theater along with Retro Productions subsequently produced Women and War at the Arclight Theater and a one-night presentation at the Players Club.
At 73 I have a new career indeed.  My novel is still sitting on the shelf, but I have excised two plays using its characters and content.  I have gone on a writing binge and have four additional plays in progress.  Stay tuned . . . 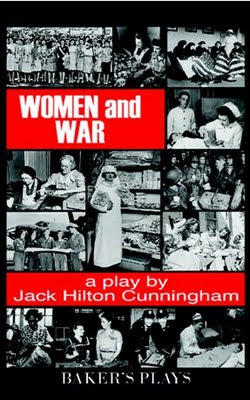 Women and War a play by Jack Hilton Cunningham.

Posted by IT Foundation at 9:49 AM