From the Trenches: Stories from the Fringe

Contributed by Guest Blogger of the Week, Andrea Alton. 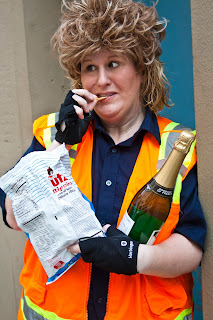 Hello Again Everyone!
It’s Wednesday, and my hair is looking great, I’m feeling good and my meds are in full swing, so here’s my next post. Since I shared some of my Fringe experiences in my last post, I decided to reach out to some people to get their Fringe experiences.
But…before I get to that, just a quick update on the cockroach I mentioned in my previous post. (The one that was in the dressing room of the Off Broadway Theatre.)
A LOT of people have expressed an interest in the roach….well, like six. Whatever. That’s not really relevant. So in 2008 I was in the dressing room with the seven and a half foot dead cockroach and I remember our director, Jay Duffer, asking me, “Do you want me to get rid of it?” For some reason that is beyond me I said, “No, don’t bother.” What the hell was I thinking? It was a dead roach, and I love it when people do things for me, but I think I just assumed that one of the other casts, the venue director or someone that cleaned the theatre would get rid of it. Or I thought Jay would scream like a big girl even though he’s (sort of) a manly man. Regardless, the roach stayed on the dressing room floor for the entire festival. So the lesson here is if someone offers to get rid of dead cockroach, just say yes.
Now on to my hard-hitting interviews with my running commentary in the side notes.
What was your funniest or most horrifying Fringe experience?
Kathleen “Last year, in our TOSOS production of The Five Lesbian Brothers' "The Secretaries," directed by Mark Finley, our tech was short, and we didn't have close to the time we needed to correctly block everything. The venue managers were far more concerned with us being able to pack up and get in and get out in the 15 minutes allotted than they were with us being able to set light levels and make sure our set pieces were placed. So our stage manager, the amazing Jen Russo, was pretty much teching the show as we went on opening night. During one exit, the stage went dark, and we heard an amazing CRASH that sounded like someone had fallen into a drum kit. Turns out someone HAD fallen into a drum kit!