We are happy to announce that this week's guest blogger is Andrea Alton. 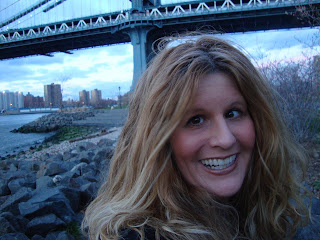 Andrea Alton is a New York based actor, comedian, producer and award winning playwright.  Favorite theatre credits include; Big Girl, Little World (NY Fringe Festival), The Strangest Kind Of Romance (Provincetown Tennessee Williams Festival), Labor Day Weekend & The Chiselers (Emerging Artists Theatre), Reckless  (Kaleidoscope Theatre), Blue Window (Firehouse Theatre, Or.), White (Trash) Wedding (The PIT, writer/performer) and Carl & Shelly, Best Friends Forever (co-writer/actor) which premiered at the 2008 NY Fringe Festival and had a month commercial run in 2010.
Andrea also performs sketch comedy, stand-up, characters, improv and has performed at the Chicago, Toronto, DC and San Francisco Sketch Comedy Festivals.  She also recently performed at the SoloNOVA Festival and will be appearing at three different HOT Festival shows at Dixon Place as her alter comedy ego Molly “Equality” Dykeman.  She is one half of the comedy duo Carl & Shelly and is a member of Emerging Artists and TOSOS Theatre Company.
As a writer, Andrea’s work has been produced throughout the country most notably in Chicago, Maryland, New York, Provincetown and Florida.  Her play Cat & Dick won the grand jury award prize from the Speaking Ring Theatre in Chicago and she recently returned from Provincetown where here play Pioneer Loving was performed at The Universal Theatre Festival.  Current projects include working on a Young Adult Novel, finishing several one-acts and putting the finishing touches on her one person show The F*cking World According To Molly which will premiere at the 2011 New York International Fringe Festival.  http://mollyequalitydykeman.com
Posted by IT Foundation at 9:16 AM