I’m going to tell you a story.

Back when I was in college - which clearly, because I am so young and vivacious and beautiful could only have been a few years ago… I was in the Actors Training Program at the University of Utah, my friend and much older classmate, Christopher Borg came to me with a play.

He came to me with a play called Psycho Beach Party by a playwright named Charles Busch. Christopher, who had been brought up in the Mormon faith in Utah, the most conservative state in the union, had found a kind of kinship with this playwright. He reveled in the humor. The characters were bright and funny and irreverent and proud. It was a different view, a different understanding, a different sensibility than we had been exposed to. It was important to Christopher that we do a production of this play.

But we decided to produce it anyway.

We wrangled a space called the AARDVARK’s Cabaret. It had 35 or 40 seats and a 10x10 foot stage. It’s sort of what I imagine the Caffé  Cino was like. We didn’t have any money to pay for the space, so… I put up my tuition money. So to be clear here, if we did not make our money back, I would have had to have dropped out of school. 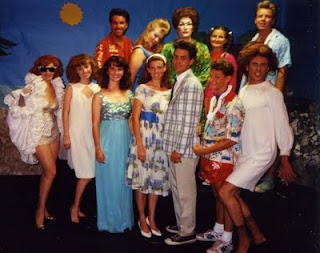 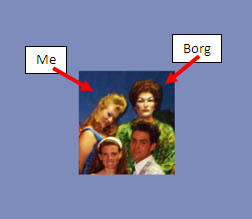 We cast, mostly our friends, but a few people we hadn’t met before. I played Marvel Anne McAllister, the bitchy blonde bombshell – just like in real life. Christopher played Mrs. Forrest. I think both of us could put up a defensible argument about who had the best part, but seriously, it was me.

We broke into the performing arts building at the university after hours and on weekends to rehearse. We literally broke in. We climbed through windows and picked the locks. Our costumer, Matt “it’s easier to ask for forgiveness than permission” Uhl, stole costumes from the theatre where he was working at the time. 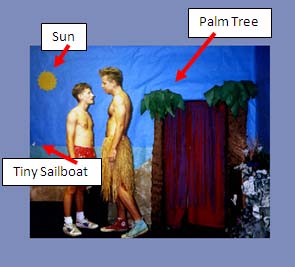 Borg had a stroke of genius and came up with a plan for a set that cost us, less than $100. We took colored butcher paper (you know, the kind they use in elementary schools) and created a set that looked like a “wish you were here” California postcard complete with palm trees and a sailboat. It was actually quite striking and fit the play perfectly. 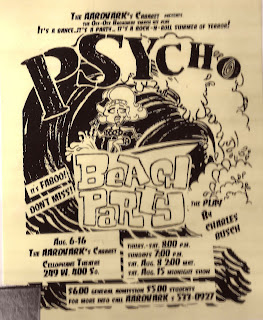 Fortunately, one of Christopher’s ex-lovers was the night manager at Kinko’s (but that’s not surprising, because seriously you couldn’t throw a rock in SLC without hitting someone that Borg had had sex with). Anyway, he made thousands of flyers for us under the radar during his graveyard shift. We ran around Salt Lake putting flyers under every windshield wiper we could find. We hung up posters, handed out flyers and sent press releases.

I’ll be honest, I was scared. I didn’t think people would come. Maybe a few of our classmates, but I didn’t think we would get an audience. If the audience was there, I wasn’t sure that they would be brave enough to come. While there was definitely a gay population, it certainly was not comfortable, or easy to be out and there had been some altercations.


Opening night, we had a few people. There were more people on stage than there were in the house though. The next night we had a relatively decent house. But the third night the drag queens came. Yes! In their 4 inch heels and beehive hair dos they came marching down West Temple. There were only 6 or 8 of them, but you couldn’t miss them. They looked like 7 foot tall goddesses.

In my mind it was the very first Gay Pride Parade in Salt Lake City. It was glorious. The next week we sold out twice.

Even my dad enjoyed it. My Dad!, who thinks that all actors are a little fruity, who still petitions me to become a lawyer and who thought that a production of The Grapes of Wrath was too racy because of language, enjoyed Psycho Beach Party.

I think at one point in Psycho Beach Party, Chicklet yells at the top of her lungs “mother fucking cock sucker!” There’s some pretty raunchy stuff in PBP. And yet somehow my dad didn’t even see that and was able to just have fun. I think beyond that, my Dad was able to see characters that he was familiar with, that he could identify with, but with a twist and it helped him see a new perspective. I’m very proud of my dad and the mental transformation that he has had over the years, but that is a story for a different blog.

The experience of producing Psycho Beach Party showed me the transformative possibilities of theatre. It gave some people a place where they were not just accepted, but celebrated. It gave someone else an opportunity to understand something that was foreign to them. And it managed these incredibly complex and profound things in under two hours and in a way that had everyone leaving the theatre happy and up lifted.

I think of a script as a foundation for a production. We would never have been able to accomplish these things had we not had such a strong and joyous foundation.

Not only did I make my tuition money back, but we were actually able to pay everyone involved; not a lot, but a little. We were very proud of ourselves and this experience set me on my path to becoming a producer.

Years later (but you know, not a lot of years, because clearly I am so young and vivacious and beautiful) I had this idea for an awards organization that celebrated Off-Off-Broadway.

We met with so many people who all told us that we were crazy. They said that OOB wasn’t worth recognizing. That OOB was too vast and there were too many people and shows for the awards to be meaningful. That everyone in OOB was out for themselves and they would never be a cohesive community. That there was no way that something like this could ever work. We knew that creating legitimacy for Off-Off-Broadway was going to be a challenge especially because back in 2004 there was no champion for OOB and it didn’t have a unified voice. 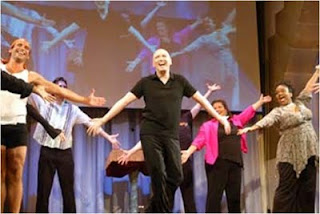 So when we produced our first award ceremony, we were met with a lot of skepticism. We had a lot to prove and we were reaching pretty high. We reached out to Charles Busch to host our ceremony. Charles had worked Off-Off-Broadway for many years. He knew the challenges that we face. He knew the insanity of self-production. But the IT Awards weren't anything. We weren’t anybody. He had no incentive to say "yes," but he did. In that moment he lent his prestige, to our fledgling organization.

When we walked into offices and said, we are having an event at the Lortel Theatre, we are already sold out AND its being hosted by Charles Busch, people started to take us seriously.

In 2009, Julie Halston hosted the ceremony and she said – “I can’t believe how much this has grown.” And it is true, we have grown faster and bigger than we could have imagined, but honestly I do not think that we would be where we are today had we not had that little injection of legitimacy that Charles so generously gave us at such a critical time in our development.

Having never met Charles, he was an influential force at two very pivotal moments in my life. Through the honesty and brilliance of his talent he contributed to an experience that was so powerful it set me on a career path. And through the generosity of his spirit and willingness to celebrate his roots, he helped build the Innovative Theatre Foundation. I can’t think of a better example of a luminary. Posted by IT Foundation at 6:14 PM