Gideon Productions did some groundbreaking work this year producing a trilogy of sci-fi plays and negotiating a group discount on a performance space.


We asked Executive Producer Sean Williams to tell us about these exciting developments.


What are the origins of Gideon Productions?

In 1999, Mac Rogers was having a bit of writer's block at the same time as I was drowning in booze in Los Angeles. He wrote a play called Dirty Juanita and sent it to me to read, it was three characters and three hours and I was completely in love. Jordana and I had just been cast opposite each other in a short film and she was flying back to New York, so I told her I wanted to move and start a theater company, and would she like to produce plays with me and Mac. To both of our surprise, she said yes.

Mac and I had produced a play the summer after our last year in college in 1996, a musical version of As You Like It with a bunch of Chapel Hill bands playing the music, and we called the company "Gideon Productions". When we initially talked about starting the company in New York, Mac called it Gideon Productions as a shorthand and we just never came up with a different name.

Very early on, the three of us discovered a very specific aesthetic which we don't have a name for but we sometimes call "opposition". There is very clearly a character who is the hero... and we're attracted to when she does something just awful. There's a moment that is clearly very, very comic, and we're attracted to making the audience feel like crying right then. If we want to tell a huge story, we focus on one or two people, if we want to tell the story of a brother and sister, we create a worldwide apocalypse.


Gideon did some groundbreaking work this year. What was the imputes to produce a sci-fi trilogy? 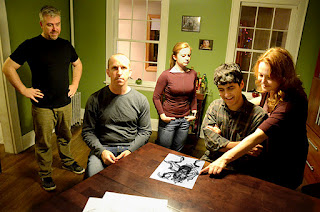 I think there is a growing group of indie artists who are affected by movies and television more than other plays. We definitely love creating work for the stage and we all want, more than anything, to continue to work in the theater, but we find the pace and plotting and subject material from film and television speaks to us. I might be wrong, it's impossible to know when you're in the middle of a movement, but it feels like the companies around us are excited by Battlestar Gallactica and Breaking Bad, rather than, say, Krapp's Last Tape.

So, we've always wanted to play with established genre. Hail Satan is like an office comedy mixed with a horror movie, Fleet Week is a cry for social justice disguised as a postwar musical, even Dirty Juanita is a discussion of straight male love affairs wrapped in an after-school special about domestic violence. When you use genre specific language, you can skip over a lot of the stuff that drags a play down. If your characters are Ninjas, and you find out that one of them killed the other's master, then you know what the deal is - they're mortal enemies, you can skip all the stuff about why.

Now, I should admit that Mac came to us and said "I think I'm writing a trilogy that's way too big for us to produce, and I don't even know why I'm doing it because it's gonna take a million dollars to create on stage... but I can't stop myself." And Jordana, Sandy and I said, "Do it. We'll figure it out," without having a SINGLE CLUE how we were gonna do it. Tim Errickson at Boomerang came to me and said, "I think we can work together to do this" and he totally saved us. He's the one who made it possible, by suggesting the BFG collective.


What where the benefits and challenges of producing a trilogy of plays?

The challenge is making the decision about exactly how to pace the programs. We have a firm belief that you have to be careful about asking too much from our community without being willing to invest more than you're asking. We are avid theater-goers and we believe strongly in supporting our brothers and sisters in the arts, with money whenever possible but more importantly as audience members.

The challenge was to figure out a schedule that would string together the pieces but wouldn't ask more from our community than they wanted to give. The LAST thing in the WORLD we wanted was to have people grudgingly showing up to our shows thinking they had JUST seen something we produced, but we also wanted to make sure that the last piece was reasonably fresh in the minds of our audience members. Another challenge was convincing audience members that they didn't have to have seen any previous installments to enjoy the current production.

But MAN, once people got invested in the characters, it was an absolute thrill to watch the second and third installment with everyone. Because we're seeing the adult versions, in the third play, of the kids in the first, we get to see how our parents influence our lives long after we're gone and forgotten. Mac got to watch the first play, and it informed rewrites on the second, just as watching the second informed rewrites on the third.

There were so many tiny moments in the last piece Sovereign that delighted the audience. When Ronnie hands Abbie a cellphone and says "I want you to have it", when she twists the alien's ear and says, "it's all right if you want to cry" - these moments were put in the third play by Mac because of the impact of the first play. Nobody ever gets to do that, it's an absolutely singular experience. It makes me feel like we should always do trilogies, exploring different genres. We could do fantasy, we could do a backstager, we could do political thrillers... if Mac would write it, I'd do it every year, regardless of how difficult it is to do.


Gideon worked with Boomerang Theatre Company and Flux Theatre Ensemble to rent a performance space essentially at bulk rate. What was that experience like?

I'd like to be clear about this - we did negotiate a good rate on the space, but that wasn't the most important aspect of working with these other companies. We saved money on several big ticket problems like space - namely, we shared expenses for publicity and on load-in and load-out of the space, we shared physical set pieces and we shared labor on construction - but more than that, we were a support structure for one another over the entire six month stretch.

Normally, you only have your own company to go to for security. But when we hit something crazy, we could write an email to the entire collective and say, "am I nuts? Did this just happen?" and you've got like-minded artists who can say, "yeah, weird..." or just as likely, "I can see why you think that, but I think it makes sense if you look at it this way..."

We had each other's backs. When I saw their shows and liked them, I had a sense of ownership and pride - these were all of us that did this. And when Gus and Heather from Flux saw Sovereign, they just beamed at us, the way my sister and brother beam at me when they see my shows. When any of us found out we had big reviewers come in, we'd send out an email and everyone would rally. It was a really beautiful relationship and the only reason we can't continue is because our three companies are moving at different speeds.


Do you think that more productions will employ this kind of collective bargaining?

It's difficult to say. Boomerang and Gideon have been around for over a decade, and Flux is the new kid on the block at something like eight years old. If other companies want to create a collective just to keep prices down, they might find it difficult to move as a collective because they might not have the same sense of artistic like-mindedness or producerial maturity (for lack of a better word).

In order for a collective to work, you have to be fully committed to producing at the very highest possible level, but you have to be flexible enough to not sweat the specifics too much. Many companies, particularly young companies, feel like they are going to change the world and have a manic sense that NOW is the time for their greatness, but in order to remain open to working in a collective you have to allow for other big thinkers and other leaders to take the reins.

If I am going to conjure up the very worst part of working within our collective, I'd be hard-pressed to come up with anything negative to say. But that's because all of us were capable of allowing the other companies the latitude to do what they needed to.

Tim at Boomerang was always making sure we weren't using our collective bargaining to shortchange anyone, so some of our negotiations would chill a bit under his direction. Flux has its own collective, in a way, so while Gideon and Boomerang could make a decision in 5 or 10 minutes, we'd have to wait a day or so for Flux to weigh in on decisions. My emails are always eleven sentences longer than they need to be.

If we were younger companies these would be obstacles, but we've been around long enough to know that none of these things are even problems, they're just personality quirks and are actually lovely. Think about it - Tim was always making sure we weren't screwing anyone and Flux was always weighing each decision carefully... and these are the worst things we can say about each other.


What is Gideon's next project?

We don't produce by a calendar, we work out of a kind of compulsion. Mac is currently working on six scripts for the stage, a screenplay and a pilot for TV. As soon as one of his stageplays takes on a life of its own, we'll know what we're producing next. More than likely, we're looking at the late spring of 2013. If Mac hasn't written anything, I have a whole host of playwrights I've been dying to produce, so we'll see where we are by the end of the year.

Shaun Bennet Wilson is constantly in demand as an actor, so we're trying to make sure she has the space to take on every possible opportunity. She's so brilliant, seeing her on stage is just a miracle and the rest of Gideon is trying to make sure we have the chance to see it as much as possible before she's on stage in our next show.

Jordana is directing for a whole host of other companies. She's doing Kill Shakespeare at ComicCon this year, and directing one acts and readings for, it seems like, half the indie theater companies in New York. Sandy is designing and building sets for the other half.