We asked Modern-Day's Founder and Artistic Director,  Pharah Jean-Philippe to tell us about their work and the audience response.

What are the origins of the Modern-Day Griot Theatre Company?

As a little girl, I’ve always loved stories; whether it was in having stories told to me by my father or making up my own stories when I played. Years ago, my acting teacher said that acting is telling the story of the character in your truth. It changed my life forever. It freed me to marry the two things I love most: acting and the art of storytelling. It also gave me my purpose for life. My love of telling the story has led me to all work in all aspects of the performing arts; which includes: acting, directing, filmmaking, writing, teaching and producing. But make no mistake about it; I am not singularly any of these titles. I am more than that. Simply put, I am a storyteller. I am a passionate artist who is in love with her art and this is why Modern-Day Griot Theatre Company was founded. It is my desire that Modern-Day Griot Theatre Company produce works that will entertain, educate and heal.

Why name our theatre company “Modern‐Day Griot”? A griot (GREE oh) is a storyteller, singer, musician and oral historian who wandered from tribe to tribe, singing songs that tell stories of cultural heritage and traditions. I wanted to create an entity that preserved this storytelling tradition. We exist to tell stories that express the struggle to understand ourselves and the world around us; to create works that excite, inflame and heal as we recreate the intimacy and tradition of the storytelling art‐form.

For Black Boys Who Have Considered Homicide When the Streets Were Too Much is a strong piece that examines the street life of several black men. Why is it important to have this conversation and present this work? 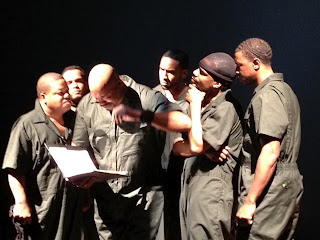 Playwright Keith Antar Mason once said, “African American men aged 24‐40 are the most likely to die from homicides than any other ethnic group in the United States.”  I just couldn’t get that harrowing statistic out of my mind.  It was with that statistic in mind that I felt compelled to produce for black boys who have considered homicide when the streets were too much written by Mason.

for black boys… is evocative work that explores the inner landscapes of six Black men attempting to reclaim their humanity and redefine their masculinity while grappling with the harsh realities of street life, violence and racial and economic injustice in the wilds of the United States.

It was imperative that we, as a theatre company, produce this because unfortunately timeless, this powerful piece of American theatre continues to reverberate with meaning in this society full of Sean Bells, Oscar Grants, Troy Davises and Trayvon Martins.  for black boys… is a brutal yet beautiful testimony that effectively communicates the ongoing struggles with which the American black man grapples and America needs to hear. This piece shows us, in essence, that in spite of what we want to believe, free really isn’t free.

Through poetry, the spoken word and dance, we got to examine this phenomena, as told to us from the perspective of men who were condemned for being black and male in America, as each journeyed through inter‐relational landscapes and moved steadily toward healing and transformation.  Black boys, young and old as well as those who want to understand them, needed to see it and experience this.

What has the audience reaction been to the production?

Opening weekend, we had talkbacks with the Playwright, the actors as well as myself with the audience members. The piece resonated with them on so many different levels. For black men, it was cathartic to see their stories up on stage. They appreciated the vulnerability displayed by the actors as they emotionally went places most men refused to go in public, much less in private.  For everyone else (regardless of color), there seemed to be a new form of understanding that was cultivated and they were happy to experience the raw intimacy displayed by the men.

For Black Boys... is nominated for Outstanding Ensemble. Why was ensemble so important to this project and how did you achieve such a cohesive effort?

When I read the play, I was struck by the openness and raw emotion of it. To me, they weren’t just words on a page; they were a door to a secret room that, although I had an idea it existed, I never took the time to imagine. I saw the men move from institutionalism to individuality within the piece. I saw both the individuality of each man, as well as, the friendship that existed between the men. I wanted to bring that camaraderie onto the stage.

We had a table read where the actors got to see themselves and the piece as a whole. I explained my concept to them and where I saw them fit within the piece. Then, I met with the actors individually so as to work on their character development. We explored the actor’s relationship with each of the monologue as well as how each monologue drove their character. We discussed the fact that each monologue was a part of a through-line of their character and where did they see their character growth, if any, at the end of the play. We had some intense one-on-ones and, believe me, it was not for the faint of heart. One or two actors withdrew from the piece, unable or unwilling to deal with the emotional commitment that I envisioned. The rest that stayed were uncomfortable, because we spent weeks on the one-on-ones. I felt that since for black boys… was such a strong ensemble piece; I wanted to hold of on the male-bonding for as long as possible because I wanted each actor to be strong in their choices made within their character development and not be influenced by the group as they worked together.
The actors trusted my vision and went along with it and for that I am glad cause it was truly tested when one actor quit opening night. I called three phenomenal actors (David Roberts, Duane Boutte and Michael Alexis Palmer) to become Brother #5, the drill-sergeant, the overseer, the storyteller for these men, the perpetual outsider. The remaining brothers had to band together, feed off each other’s energy as well as the ever-changing energies of the different Brother #5s each show. I felt that this raised the stakes for all the actors as well as heighted their emotional awareness (of themselves, of each other and of the story as a whole).

I feel that the work that we did as well as the adversities we faced in the production bonded us (cast and crew) together and taught us that it wasn’t about us. It’s about the telling of these men’s stories; the repairing of souls; and the witnessing of raw intimacy the likes that is seldom seen.

What was it like working at the Schermerhorn Center?

The Actor’s Fund Art Center at the Schermerhorn was a tremendous place to house our first production. Not only was the space beautiful, Matthew Brookshire, the Activities Manager, and his crew were amazing and patient.  It is the ideal theatre space for those who want to produce in Brooklyn. I will gladly produce more shows in that space.

What is next for Modern-Day Griot Theatre Company?

For our second season, we are working in the theme of social justice; so we are currently looking at several plays, shows and concepts that speak to that thematically. We are also looking to work collaboratively with a couple of theatre groups and artistic organizations this year: Reel Sisters of the Diaspora, Soul of Brooklyn Consortium, and Artistic New Directions, just to name a few.

We are currently in the process of updating our website: www.moderndaygriot.org which will be up by October 2012; so please feel free to stop by to see our new season as well as pictures of our past season.

Contratulations to everyone at Modern-Day Griot Theatre!