Since 2007 the FullStop Collective has been producing new and innovative work. This last season they took on a musical set in a landfill in the future.

Producing Director, Leta Tremblay shares a little about their company and working on Unville Brazil.

What were the origins of the FullStop Collective?
FullStop Collective was originally formed in 2007 by a group of students who studied together at the Eugene O'Neill National Institute. After we graduated from our respective colleges, a contingent of us moved to New York City where we knew that we wanted to continue to work together and support each others artistic endeavors. That first year included a workshop of new plays in Upstate New York, a world premier production in the New York International Fringe Festival, and site-specific stagings of one week of Suzan-Lori Parks' 365 Days/365 Plays. Since then, we've continued to expand our artistic community and to heighten the production value of our shows which led us to our first ever musical, Unville Brrazil! 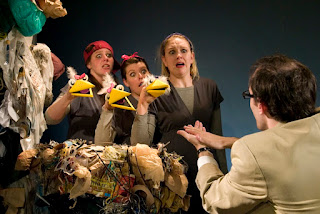 Playwright Patrick Shaw and director Brian Hashimoto began cooking up the idea of what would become Unville Brazil back in 2008. I recently asked Brian this question to refresh my memory and this is what he said: "Two guys, a bar, a rhyming dictionary, and something to do with garbage. That was literally the impetus. It was originally imagined as a serial musical radio drama." The story developed from there. Pat began writing songs on his guitar, Brian incorporated his love for puppets in the staging, and we added actors in a public reading to flush out the characters. Each new added element inspired the further gestation of the project.

What are the challenges of producing a new musical?
The music! Music added an entirely new set of challenges to producing a new play. Originally we hoped to have live musicians on stage throughout the performance but it quickly became apparent that this was not feasible for us for this production. Our backup plan was to prerecord all of the music and incorporate it into the sound design. This actually turned out to be a great solution because the actors were able to rehearse with the recordings (they still sang live) and we had more control over the volume and balance of the music in performance.

Did you incorporate green practices into the production?
Absolutely. This was a huge initiative for us. Nearly the entirety of our set was constructed out of recycled materials. The play takes place in a landfill so it was actually easy for us to collect recycling from the cast, crew, and community to build our set. We also chose to go almost entirely paperless with our programs. Cast bios were posted on the lobby walls and on our website along with other pertinent information. Water and wine was served during intermission in reusable mugs that were returned after use and washed at the end of each show. We sold FullStop branded tote bags to encourage our audience to use reusable bags when shopping rather than constantly bringing home plastic.

What was your favorite line in the production?
This is such a hard question! Pat's writing is so poetic and there are so many beautiful lines in this play but I'm actually going to answer with some lyrics from the opening song:

I know,
This seems like the end
Of ice caps, trees, and the inter-specicial friends
I know,
You think you're at the end
Of the world
But then again
There's much more to be done
There's plans and dreams and history to be spun
You're not giving up when you know it's time
To begin again

In this beginning is the thesis for the journey that this musical takes you on. For me, the play is a call to arms in the form of a love story. It speaks to where our world is headed if we continue on in this way with disregard for how we are affecting the lives of future generations. But it also speaks to the doubts that we all face as individuals. Have I made the right choices? Is this all that there is to life? Unville Brazil 's answer is that there is always more to be done, and always time to begin again.


What is FullStop currently working on?
FullStop Collective just wrapped Cause of Failure at the 2012 New York International Fringe Festival this summer to great reviews and an opportunity for the play to be published on Indie Theater Now! Next up, we are producing Outfoxed, a new play by Lucy Gillespie, at Access Theater November 29 - December 16. And Brian reprises his role as director. Here's the teaser:

A bookish American student abroad gets in over her head in a life of sex and drugs.
Her mother gets a phone call…

I hope that you'll check out www.fullstopcollective.org in the coming months for more details and join us at the theater this winter!
Posted by IT Foundation at 10:30 AM