Hard Sparks is an inspirational company that works in intimate spaces. They choose productions that promote positive change and they strive to worthy community organizations.

We caught up with Artistic Director J. Stephen Brantley to find out more about this community minded company.


What are the origins of Hard Sparks and what is the significance of the company name?

Hard Sparks takes its name from The Zohar, which is the scared text of Kabbalah. It refers to the idea that we are here to elevate the sparks of creation. I think that’s what theatre does, at its best. It’s about transformative sharing, which sounds very heart-and-flowers but trust me, nothing kicks your ass harder than striving to serve a higher purpose.

Hard Sparks chooses to work with playwrights and actors who are "early-to mid-career" Why this specific group of artists?
We don’t have anything against established artists – in fact we’ve worked with quite a few this year. But when Robert Lohman and I launched Hard Sparks, it was partly to showcase actors and writers who weren’t being seen as much, or treated as well, as we thought they deserved. It’s a long list. We’ve barely made a dent. 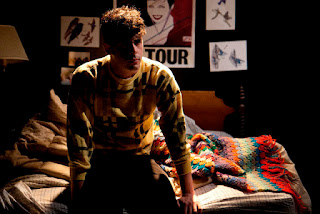 Eightythree Down is a pretty intense work. Was any of it based on personal experiences? What was the inspiration for this play?
It’s actually not on my personal experiences. Because I’ve been very open about my own addiction, and three of the four characters in Eightythree Down are users, there’s been an assumption that it’s based on my actual life experience. To be clear, my drug of choice was heroin not cocaine, and in 1983 I was twelve years old and living in Plano Texas, nowhere near the East Village. My party days came much later, and it was dope and grunge, not coke and new wave. What is familiar to me is Martin’s loneliness, his protective little nest and the way it is ultimately destroyed. I spent my teenage years listening to The Smiths and living vicariously through others, and I know how that kind of pain catches up to you later. Other than that? My dad really did work for the mobile communications industry in 1983 and we really did have a phone in our car!

The ensemble received a nomination and each actor has praised the tremendous trust and care that was required in the rehearsal process. How did you achieve that sense of safety and what was the result in your opinion?
Our fearless foursome – Melody Bates, Ian Holcomb, Bryan Kaplan and Brian Miskell – turned in some of the bravest performances I’ve ever seen. This has everything to do with director Daniel Talbott’s way of working with actors. He’s not ensconced behind some table or buried in the script. He’s up there, in there, with them. He’s an actor himself, and actors can sense that. They know he’s not asking them to go anywhere he wouldn’t venture himself. For my part, I just tried to remind them that what they do is extraordinary. I believe it’s sacred. And they should honor and trust the full force of the abilities. Plus I brought them snacks.

What was the most satisfying part of working on this production?
Daniel pushed me to develop the script in the room. It came along leaps and bounds, thanks to him. But I think what was most satisfying to me was watching those actors connect to one another, and work all together. Their individual IT Award nominations are well-deserved, but it’s their Ensemble nod that really thrills me. The way they collaborated was so inspiring and deeply meaningful for me. Hard Sparks is about giving artists the opportunity to do that, and I’m incredibly grateful to them for responding with such passion and generosity.

What is next for Hard Sparks?
No idea really. My goal was to fuse edgy theatre with social issues, and to partner with other non-for-profits to improve people’s lives. What I’ve found in the two short years since we launched is that just getting a show funded and on its feet is tough enough, even without trying to save the world. So we’re weighing some options and looking at different ways of doing things. As soon as we’ve worked it all out, we’ll gladly share the secret formula!


Congratulations to the cast and crew of Eightythree Down!
Posted by IT Foundation at 10:30 AM