Miranda stretched the musical theatre art form in some exciting and modern ways this last season.

We caught up with creator and composer Kamala Sankaram to ask about this groundbreaking work.

Miranda is described as a "The Steampunk Murder Mystery Opera." What was the inspiration for this Musical?

I was really interested in writing a modern opera- something that would borrow from the classical form, but would resonate for a contemporary audience. I settled on using the frame of reality TV. In a reality TV show, we’re conditioned to accept these very stylized versions of people, complete with theme music. It seemed a natural extension to then have the stylization include singing. This frame also led to some of the major themes in the show, such as the idea that you can’t really judge a person by what you see of them (or by what music they happen to have attached to them.)

Miranda was really a multi-media project that mashes up various genres. What were the challenges of piecing together all of these elements. 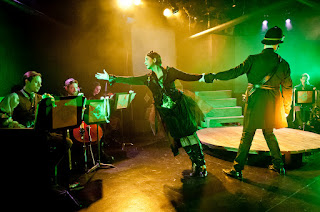 I’m very interested in mash-ups, and have used this approach in some of my other works. In this case, the different genres were used to give a sense of character to the murder suspects. I was interested in seeing whether one genre would tend to sway the audience toward voting for a suspect more or less than the others… and it did! I think part of what helped the different elements hang together was to have a strong overarching aesthetic- that of steampunk. Steampunk is a branch of sci-fi that imagines what the modern world would look like if it relied on mechanical, rather than electrical, power. It uses Victorian England as a jumping off point. I first settled on steampunk because it allowed us to use a law that was in effect in Britain at the time- if you were wealthy, you could pay someone poor to stand trial for you (and sometimes even to serve your sentence. This is actually going on in China right now). But I’ve always had a fascination with old machines, gears, and corsets so it just made sense that the entire world of the show should use the steampunk aesthetic. We were also lucky to have a great design team involved (including Matt Tennie designing the video and Spike McCue performing the live video feeds), so we seemed to be pretty much on the same page.

What was the audience's reaction to the piece?

I was pretty amazed by the audience- we had people ranging in age from 8 years old to 73, from different ethnic backgrounds, theater people, opera people, people who had never been to a downtown show before… And they really seemed to get into it! Even the audience who started out not wanting to yell along with the Bailiff (Jerry Miller- who did a fabulous job getting the audience involved), by the end was fully invested in seeing their murder suspect get punished. I heard many people arguing about it afterward. I also got so many requests for cds that we decided to record a cast album, which is being mixed right now.

What was the most satisfying part of creating Miranda?

This was my first large-scale work, and, honestly, I didn’t know if I was going to be able to pull it off. So, it was thrilling to see it come to life in a way that I never could have imagined. It was also such a treat to be able to get to know all of the people who worked on the show and made it happen- it wouldn’t have been possible without them, and without the support of HERE, which gave me space to develop the show through their artist residency program.

Do you think musical theatre is still important and why?

I do think musical theatre is important for several reasons:

What is next for the artists involved with this project?

We have another big show in the works, but are holding off for a bit to let everyone spend some time on their individual projects before we jump back in.

Rob and I received a commission from Opera on Tap to write an immersive parlor mystery, so we’re working on that right now. I’m also working on a new show (Thumbprint) with playwright Susan Yankowitz based on the life of Mukhtar Mai, which will be produced by Beth Morrison Projects. Rob, Matt Schloss (sound design), and Eric Brenner (the voice of DAVE) have been finishing their own musical- Yahweh’s Follies. Lauren Yalango and Christopher Grant (choreography) are on tour with Pilobolus. Most of the cast members are composers in their own right, so they’re all writing music and performing... It’s an amazing group of people!