Co-Founder and Executive Artistic Director, Kevin Liabson explains their esthetic and how this form of theatre engages and excites audiences.

What are the origins of Magic Futurebox and what is the significance of the company name?
A couple of years back, my now-partner Suzan Eraslan was working as Programming Director for The Tank. She took me on as a theater curator there. At the time, I was working with a different theater company, and as we embarked on a big series at The Tank - the Public Domain series - my partners at that company all got married and had babies all within a fairly small time frame. As such, Suzan stepped in to help with a lot of the production aspects of Public Domain. Before we knew it, we were producing together full time. Immediately after Suzan left The Tank, we were given the opportunity to move in to our space in Brooklyn, and it's been pretty non-stop ever since. We're currently running, I believe, our twentieth production in 2 years.

In terms of the name, it's not a great story - when we realized that what we were doing constituted running a company, and needed to get our LLC, and thus a name, we spent a day or so throwing possible names around. As you do when you're naming something, a possibility would come up, and we'd google it and see if it was taken. Suzan suggested something, I said, "let me look it up on the old magic futurebox," which was just how I occasionally referred to my laptop, and she hit me and asked why I'd been holding that phrase out on her. It stuck. Tommy Smith, who wrote Demon Dreams (and two other shows we've produced), called it "the eventual result of producing all of these shows - it's the thing we're gonna open in the future, and we'll look back and see everything that's gone on and realize that we are in the future as a result of opening that magic futurebox in the first place," which I like better.

Tell us what 'story theatre' is? and why do you choose to work in this form of theatre? 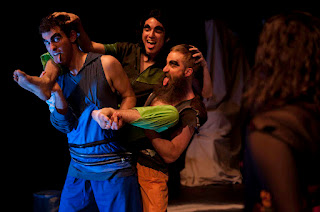 Story theater is a form wherein actors both narrate and play the story. As an actor mimes opening a door, he might say "the baker creaked the door open and crept through." He then may continue to narrate or enter in to dialogue, but he never (or rarely) exits the story, exactly. The form was created by Paul Sills while he was working with the Game Theater in Chicago in 1968. The form requires no sets, costumes, or props - all factors of the environment are suggested by the actors through spacework, and often a shadow screen. A small group of actors play several characters each, and usually, there's a circle on the floor which is used as a guideline for travel, passage of time, etc. It's an incredible form when it's done well - it allows the audience to experience storytelling and theater the way that children do, but without any sort of pandering or condescension. It's a form that allows for wonder and awe. I had the good fortune to work with Paul on several story theater productions while I was at the New Actors Workshop, either as an actor, musician, or lighting designer, and then stage managed several more for Jason Hale, a student of Paul's and a real master of the form.

Generally, story theater is applied to a collection of folk tales or classic stories. I'm very interested in applying the form to other work. I feel like there are so many ways in which other media has theater beat in it's effectiveness, and the only theater that really excites me is that which capitalizes on its form. Story theater, for instance, doesn't work on screen. Or hasn't yet.  I want to make theater that has to be theater. Story theater allows the audience to involve themselves in the creation of the piece by imagining the wall separating the two young lovers, as the actors simply lean on the space between them. If we're gonna get a whole bunch of people in the room for something, shouldn't we invite them to play?

Demon Dreams incorporated live music. What were the benefits and challenges of this?
Music's a pretty integral part of the story theater form, and Tommy capitalizes on it beautifully in the script to Demon Dreams. Because the form is so open and playful, audiences are totally willing to accept songs and underscoring - anything that helps shape the environment, tonally or otherwise. We brought in the Wiz Kids, a couple of DJs who had invented a wearable turntable set (TurnTableTar) to play the shows, and Paul Miller aka DJ Spooky generously provided tracks for us to use as the beats for lyrics Tommy had written. Having live musicians is a huge boon to a story theater show, as the music and the sounds they can provide further shape the environment. Most of our sound effects were variations on record scratches and such, and we focused on underscoring the show the way you would a Warner Brothers cartoon.  Having the flexibility of live musicians playing with the cast, we were able to allow the cast to improvise physical choices a lot more than if we were tethered to a sound board.

What has the audiences reaction been to Demon Dreams and your other productions?
Demon Dreams was pretty well received. Basically, it's a fun, high-energy children's show questioning the innate goodness or evil-ness of human beings. What's not to love, right? Our shows seem generally to be fairly popular, but it's a tough question. I'm not out to shock or offend anybody, but I don't think everybody should like everything. People who thought Demon Dreams was too silly or frivolous loved Firemen, another of Tommy's shows we produced, which was anything but. Theater is for audience, absolutely. But any given piece has its own audience, and not everyone is a part of any given audience. If everybody likes what we're doing, then we're not doing our job.

What was the most satisfying part of working on this production?
I was (and continue to be) super duper in crazy love with the cast. They were 6 of the most giving, collaborative people I've ever worked with, and I'd do anything for them. So much of my job for this show was just to set up an environment wherein they could play around until they found something wonderful. I really just got out of their way. Only one of them, Joe Burch, had worked in story theater before (Joe and I both played Hanrahan in Paul Sills' adaptation of Yeats' The Stories of Red Hanrahan), and teaching the conventions of the form to these lovely, playful people was incredibly satisfying.  It's such a cool form, and working with pros who'd never really seen it before served to reinforce my love for it.

What is next for Magic Futurebox?
I think I can officially announce that we're extending our current show, Open Up, Hadrian, which we're co-producing at our space with Caborca Theater through Sept. 29th. We've just started rehearsals for Bloody Lullabies for Brave Women, a new piece my partner Suzan commissioned from Miranda Huba, which will be a very limited run to benefit the New York Abortion Access Fund.  We've also got the Deconstructive Theatre Project in residency at our space working on The Orpheus Variations, which will run at our space Oct.19-28th, and we're about to start casting The Carnivorous, a play by Julian Mesri, the focus of our Playwright Spotlight this year.  The Playwright Spotlight program focuses on one writer a year - MFb produces three of their plays, showcasing the breadth of their work.  Last year's Spotlight was Tommy - Demon Dreams was the second of his pieces we produced.  We're also working with Tommy on a new show, hopefully for Spring, but it's in the earliest stages of development. We have about 5 other projects in some stage of development, as well as upcoming workshops and residencies. I know that's a lot of information, but there's even more at magicfuturebox.com.