The Message of The Archive

An interview with the Director of the Archive at La MaMa, Ozzie Rodriguez 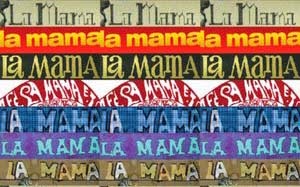 What is the importance of the archive?

We have a cabaret. We have three theatres; two smaller ones and one large one. We have seven floors of rehearsal space. We also have a gallery and a reading series. We have touring companies. All of these things needed to be documented. Not only are we recording the history of the company, but we are chronicling the development of the artists and Off-Off-Broadway theatre and how all of that influences American culture and contributes to our shared history.

You know we started at a critical moment. We started at the nexus of the Vietnam War, the Civil Rights Movement, the rise of feminism, and we had the gay liberation movement all happening simultaneously. It was not accidental that Off-Off-Broadway was born from that. There was no place in commercial theatre to discuss these topics. La MaMa and Off-Off-Broadway have always been a reflection of the time.

For the first time artists were given the platform to address the ideas of the day and to experiment. Commercial theatre only presented traditional, familiar fare. The disenfranchised artists were the ones reflecting what was really happening. In the 1960’s La Mama had women directors and women playwrights, which did not exist at major commercial theatres at the time. You had playwrights suddenly deciding to incorporate sound or dance or poetry. There was nothing to lose. There were genuine experiments to find a different way to communicate with the audience.

There was a time when putting comic books on stage was a trend and that was something that started in the Caffe Cino by Robert Patrick. “What do we have this evening? We’re going to enact this comic book.” The very idea that you could do that and infuse a serious, creative, theatrical presentation with pop culture was groundbreaking. That kind of freedom gave license to things like performance art and one innovation inspired the next. Playwright Patrick went on to write Kennedy's Children.


Tom O’Horgan use to host happenings. When we arrived, we each got an instrument and we all played. Somebody rang gongs and somebody hit bells. He had tapped into the energy of the time and those gatherings informed his work and became more formalized and eventually became HAIR, which revolutionized Broadway. When it opened in 1968, HAIR violated every commercial theater taboo that existed at that time. It was agitation propaganda. It included rock-and-roll for the first time on Broadway. There were no stars. It addressed issues like unwed mothers. It talked about black girls finding “white boys so pretty.” It was psychedelic and went in every direction and no one expected it to be a success, but it struck a chord that reflected that young generation. When that wave hit, it changed not only  Broadway, but the theatrical audience, which had become a staid and older demographic. HAIR appealed to a whole new young audience and destroyed the proscenium once and for all.

Something that La MaMa did right off the bat was to completely change the relationship between the audience and the performer. By virtue of the fact that the environment was what it was, the relationship with the audience had to change. We had brick walls because we were performing in tenements or lofts - before it was fashionable. Ellen looked at these spaces and saw what she could do as far as theatre was concerned. No one was thinking we were starting a trend. This is what we had. We did not need gold flocked angels on the ceiling or anything like that.

This was a time when it wasn’t about what you CAN’T do, it was more about HOW CAN you do this? And Ellen was fearless. I mean I equate Ellen with Isadora Duncan; with Martha Graham, Madame Curie. Just think, a black lady in the 60’s in New York, doing things that were literally unheard of at the time.

All of these events were literally historic and that is why the archives are so important.

We are losing a lot of our artists. I mean in the 1980’s we had devastating losses, but we have those artists work represented here in the archive. And because so many of them were instrumental in developing something new, it is even more important to have it cataloged and available to young people. The number of artists who we present is ever growing – it is growing exponentially. The more we produce, the more we do, the more of a responsibility we have to document their contributions and the contributions of La MaMa and the Off-Off-Broadway theatre movement.

Andrei Serban, the head of the School of Arts at Columbia University was one of our artistic directors. Ellen, Elizabeth Swados and Andre created The great Jones Repertory Company of La Mama.  Wilfred Leach, another of our artistic directors,  went on to get a Tony for The Pirates of Penzance and The Mystery of Edwin Drood. Mary Alice Smith started here and received a Tony for Fences. Tom Eyen wrote Dream Girls. Harvey Fierstein wrote Torch Song Trilogy and currently has two Broadway shows running and is preparing a third. If they hadn’t had the freedom to explore and experiment and the opportunity to collaborate here, they wouldn’t have had those successes. There is a direct line and the archive demonstrates that. That inspires people and ultimately that is most precious thing the archive can do; inspire you not to give up, inspire you to follow your own dream, and inspire you to take the goddamn risk! Fall on your face. It’s okay. This is the place where you can. Fall on your face, pick yourself up and do it again and do it better this time. And really that is the message of the archive.

The La MaMa Archives is a not-for-profit organization sustained by La MaMa E.T.C. The Archives are made available to the public as an educational service to the performing arts community, the press, scholars, historians, emerging artists, and students of theatre the world over. The Archives are open to the public Monday-Friday, Noon to 5PM and is located at 66 East 4th Street on the Mezzanine level.

Posted by IT Foundation at 1:43 PM