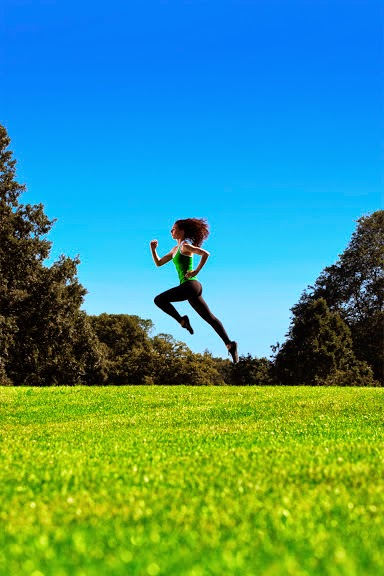 My solo work, ENDURE, was a site-specific dance/theater piece in which the audience (and me, the performer) wore headphones. We used synchronized iPods with a soundtrack of original text and a musical score composed by Sweden’s Christine Owman. The work was about one runner’s first marathon and the events in her life that brought her to the start line, and the audience followed the performer through public park space on what ended up being a 3 mile route. The technology served several purposes, not the least of which was letting me off the hook from speaking/projecting during this super-physical  outdoor piece in which I end up dancing and running between 4 and 5 miles per show.

But the major impact of the headphones, and one that would not have been possible without them, was the effect of hearing inside this runner’s mind: her thoughts, her story, her pace as she calculates how far she’s gone and how much is left. Since the iPods were synced, everyone heard the same thing at the same time, so we could create a world where movement, sound and the environment link up in surprising, funny and meaningful ways. Late in the play, the narrator speaks directly to the audience, urging them to keep going, while the performer looks each of them in the eye and hands them special, secret gifts.

The impact that had – both the sound directly in each audience member’s ears and my freedom to relate to each person individually – was a sense that the performance was theirs. It was, to a certain extent, a very private, personal experience for each person, even though all of us were moving through very public space.

This sense of immediacy became an obsession for me. It blurred and often dissolved the separation between audience and the work, which meant I was able to touch my audiences in a more intimate way. So when I started my most recent work, IN YOU. (AND YOU?) created in residence at BAX/Brooklyn Arts Exchange, I wanted to see if I could re-create that intimacy in a more traditional theatre setting. With headphones, you are immersed or contained in a world of sound. With IN YOU, we worked with surround sound, using five speakers to create that container around a seated audience. This gave us more flexibility in terms of manipulating where sound comes from and gave us greater control over when sound truly surrounded audiences and took them over.

I identify as a writer first and, if pushed, a mover second. Sound and sound technology wasn’t on my radar until 2011 when I figured out by accident that you can’t escape from sound. With sound and with the kind of technology that puts sound at the forefront of the experience, I get the kind of intimacy I’m going for. By penetrating my audience’s earholes.

Melanie Jones is a Canadian-born writer, performer and producer. She is a 2013-15 BAX/Brooklyn Arts Exchange Artist In Residence. She has written and performed three solo theater works including IN YOU. (AND YOU?) created at BAX and ENDURE: A RUN WOMAN SHOW, which was presented in London during the 2012 Olympic Games and as part of the 2013 Scotiabank Calgary Marathon. Jones was awarded 2012 NYIT (New York Innovative Theater) Awards for Solo Performance and Original Full-length Script and was shortlisted for the Brick Award at the 2012 Edinburgh Festival Fringe. Her theatrical work has been presented in four countries and her work as a writer has taken her to Paris, Zambia, India and Haiti. Author of three published nonfiction books, Jones also created more than 50 episodes for CityTV, 55 videos for the LEAP PROJECT, an online course for distressed youth, and more than 25 stories for WAVES OF CHANGE, documenting the world water crisis. She was a 2013 TEDxCalgary speaker.