My whole life I had been a singer. I took my first voice lesson at 9, went on to study music in college and until I was 24 every spare moment was spent singing, studying singing, talking about singing, or listening to Broadway cast recordings. I never envisioned a world where music wasn’t THE MOST IMPORTANT THING. Then at age 24 I met my ex-husband, and I stopped singing. Completely. I was in love and making money, and I don’t remember what else happened for the next 9 years but it wasn’t music. So divorced at age 33, I decided to reclaim my showtunes. I reconnected with my college voice teacher, and I enrolled in a cabaret class at the Y. This is where I started to develop a technique in “personal storytelling” which completely changed the singing game for me. It was a beginner class and, for the final performance, we got to sing 3 songs, and the teacher requested we do a little bit of “patter” before one song. “Patter” in cabaret is basically dialogue before a song to add context. One of my songs was “How Did We Come to This?” From the Andrew Lippa Wild Party. It’s a lush ballad that has a vocally dramatic arc that’s perfect for a belty-mixer like myself. With this song, I took on the “patter” assignment and ended up writing a whole monologue about the “wild party” I was having while owning the bar, and how, with my frosty beer goggles on, I was missing the signs of a marriage falling apart. I’m gonna pat myself on the back here and say: I took “patter” to the next level. But the coolest part was that after telling my personal story, singing the song was a completely different experience. I’d “made it my own,” and I turned the song into something the audience had never seen before and could never see again. After all the years of acting teachers preaching “make it your own,” I finally heard them! I found “my own”… and I started doing it with every song I sang… and wrote a one woman show called Tinder Roulette… and now I don’t ever want to stop telling stories with my showtunes. 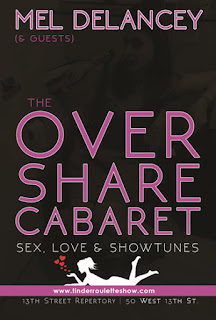 My current project is The Over Share Cabaret, a Broadway variety show of my own invention. It takes place at 13th Street Repertory, which is not your usual cabaret venue. Cabaret is often defined by where it takes place: a nightclub where people can eat, drink, and dance. The acts are not just entertainment but ambiance. 13th Street Rep is in fact a standard theater, a cozy, 65-seat space with a rickety piano and a quaint wine barrel bar area in the lobby. Alcohol is of course an essential ingredient to a performance where the emcee talks openly about her sex life in between Rodgers & Hammerstein standards. I wanted to have this show at the Rep because it’s in the heart of Greenwich Village where I’ve lived for 20 years, the coolest place on Earth. For me, the “vibe” of the whole night is just as important as the show itself. I’m working hard at creating that vibe as I build the audience, company and structure of Over Share Cabaret. Right now, the show is a combination of musical theater tribute, sketch comedy and personal storytelling.


Thinking ahead for Over Share and myself as an artist:

I’ve been a wild child in Manhattan since 1996 and love sharing my adventures on stage. And I love my showtunes. I may never get to do that production of Guys & Dolls where I play all 4 leads at once like I do in my fantasy, but I can sing “Adelaide’s Lament” and make it relevant 78 years later by telling a story about a recent STD scare I had... which you only know isn’t true because, of course, I’m a virgin.

Mel DeLancey is a cabaret singer and musical theater enthusiast living in Manhattan. She is the creator of The Over Share Cabaret, a new variety show and performance party at 13th Street Repertory. She's returning to 13th Street after her success there with Tinder Roulette, her autobiographical musical revue about her unconventional childhood, eccentric failed marriage and internet dating experiences. Mel has been an actress of the New York Indie Theater scene for the last 16 years, including 5 years as a founding member of the sketch comedy group, Slightly Known People, where she first got to flex her writing muscles. She is a member of the Dysfunctional Theater Collective and looks forward to bringing her original program I Heart Showtunes back to Governor's Island this summer as part of the artist residency program. In addition to her work in the arts, Mel is the founder of Joyful Fitness, her personal training company.