And a Child Shall Lead Them

x
Contributed by Guest Blogger of the week, Doric Wilson. 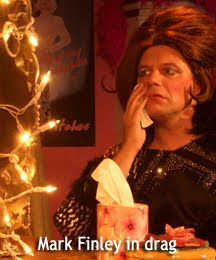 The last mentor I focus on may seem a bit odd. One assumes that to be a mentor, wisdom and age is essential. But to teach an old dog sometimes you need a new trickster. About ten years ago I went hear pianist Ellen Starr in a club on 46 Street. Jazz singer Robert Locke invited me to join his table, and introduced me to Mark Finley. I met Mark when I had completely given up
on theatre. I had vowed that the next off-off-Broadway production I would participate in would be my funeral. But we started talking and by osmosis he eventually taught me to see again.

I am four times Mark’s age (if he is to be believed) and however smart and talented he is, the jury may still be out when it comes to wisdom. I have no idea how many people have directed my plays over the years, but no one has ever given them more honest productions, including me. What stands out in Mark Finley's work is an ability to zero in on the tone of a script and to cast it flawlessly. He then stands back and lets it blossom. In fact his perfect casting may be the root of his genius. His productions seem inevitable. He also is a wise (ha! There’s the Wisdom!) and wry playwright. And an excellent actor. And the least convincing drag performer in the entire history of transvestism.

Lorraine Larson shaped my mind to creative possibilities, Richard Barr taught me how make that imagination a reality, and Mark Finley made me believe again. Because of him I am working on a new play. And to me that is the very essence of Alternative Theater. Creativity, imagination, and belief. I did ultimately make it into those sophisticated drawing rooms. But I didn’t stay all that long. Turns out there were even more rattlesnakes slithering around there than back home in the Gorge.

Saturday, February 20 , after 9 pm, Doric Wilson invites everyone to help him celebrate his 71st th Birthday at a no-host get-together at Zuni (598 9th Ave at 43rd Street). In lieu of presents, Doric requests that friends consider making a small tax-exempt donation to TOSOS.