x
Contributed by Guest Blogger of the week, Doric Wilson. 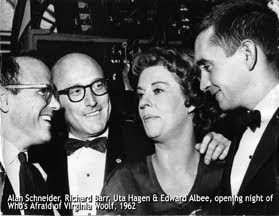 Had I not left school early (so to speak) I never would have walked in the door of the Caffe Cino. It was during the run of And He Made a Her that I met my second most important mentor. Richard Barr was involved with Orson Wells and the Mercury Theater. (He is the first voice you hear in Citizen Kane). After producing on Broadway (Bert Lahr in Hotel Paradiso, Nancy Walker in Fallen Angels, etc.), he decided to move Off-Broadway to, in his words, “Turn the theater back to the playwright.'' In 1960, Richard mounted Edward Albee's first play, The Zoo Story, beginning a long time relationship with the playwright.

He also presented the first American professional productions of works by Ionesco and de Ghelderode and the world premiere of Samuel Becket’s Happy Days. In 1967 he became president of the League of New York Theaters, instituting the 8 pm Broadway curtain and inventing the preview (Who's Afraid of Virginia Woolf) to replace out-of-town tryouts. But more significantly, he was the first producer to recognize the importance of Off-Off-Broadway. Among the playwrights he found there were John Guare, A. R. Gurney, LeRoi Jones (Amiri Baraka), Terrence McNally, Sam Shepard, Jean-Claude Van Itallie, Lanford Wilson, and even Doric Wilson (no relation). An alternative theater award really should be named after Richard Barr, no one ever did more to legitimize what we do. He taught me how to produce and gave me the courage to start TOSOS.

I was sort of an unpaid assistant for Who's Afraid of Virginia Woolf and got to watch and learn.
At the time, there was a lot of concern. The play was very long with some heavy going language
new to the delicate ears of uptown. Thanks to the McCarthy hearings, Uta Hagen had been
away from the stage for a long time. In 1963, no one was sure if she would be welcomed back.
A week before it started previews, Clinton Wilder, the co-producer begged me to use whatever
influence I had over Richard to get him to make Edward change the title of the play. Richard
budgeted Virginia Woolf for $65,000 but brought it in for $30,000, giving it a cushion to run long enough for word-of-mouth to counter hostile reviews. And the reviews were very Republican.