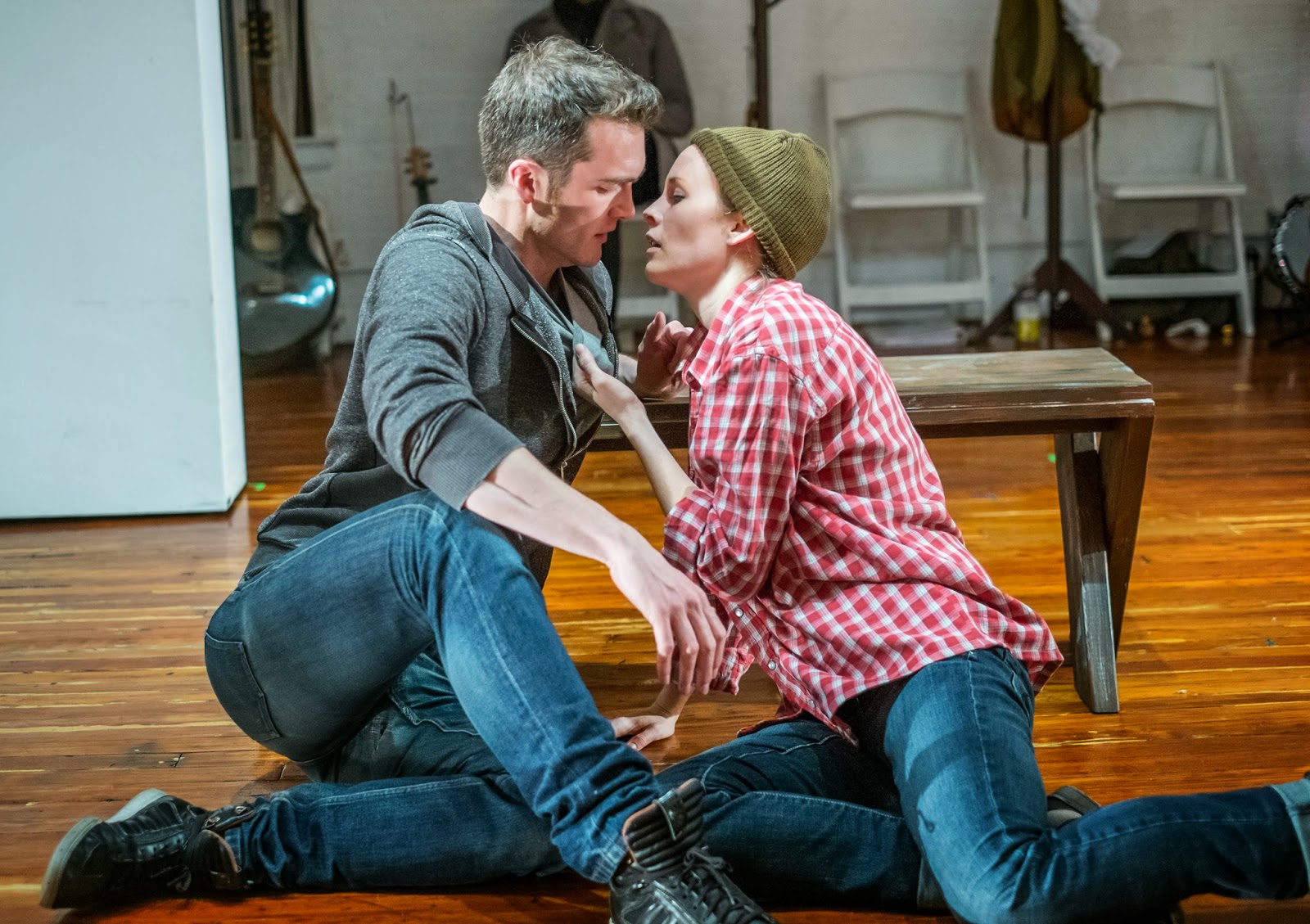 About this Production
This production of As You Like It was a seven-person adaptation in which every actor plays multiple parts. No matter the year in which a production is set, it’s always taking place in the year it was written (in this case, probably 1599 or 1600) and the year it is produced (in this case, check your cell phone) and this production embraced, rather than covered up, this fact. By setting the play in a contemporary world, video and modern devices such as cell phones were used to establish the court as driven by the technology and the media of our modern age. In contrast, the human connection within the forest, employed transparent theatricality and an abundance of live music in which every member of the ensemble participated helped to ground the production in a time reminiscent of when it was written.

Eric: We were interested in creating an ensemble-driven piece, and much of As You Like It is about community. As a fledgling theatre company, we also found resonance in the way that these characters take agency of their own lives to overcome challenging circumstances. To us, the transformative power of the forest of Arden became analogous to the theatre itself. We were also attracted to the large number of opportunities that the play has to incorporate live music.

I found Jacques and Oliver to be extraordinarily difficult characters who I always felt I should like more than I actually did when I saw other productions. So I wanted to dig in and see if I could figure them out a little bit more. At the end of the process have a deep love of both.

Alexander: I had been friends with many of the people involved in the show for years and we were all looking for a project to work together on. Ellen & Eric presented us with this idea and we all said, "Absolutely!"

Patrick: Ellen Adair and I had understudied together on a Shakespeare piece (Fiasco's Cymbeline at Barrow St. Theatre). We acted together all the time in understudy rehearsal, but never actually on stage! It was so thrilling to play Orlando to her Rosalind and to work with the entire incredible ensemble each performance.

Ellen: Though I will try to answer these questions as an actor, nominated for my work as part of the ensemble, and not as director or producer, it's hard to divide the two for this question, but I will try! I've said for many years that Rosalind is my favorite character in all of dramatic literature, and that if I died without playing Rosalind, on my death bed I would have the following complaints: 1. I never played Rosalind. This is not the reason I wanted to create a theatre company--which was born out of a feeling that I want to take more responsibility in making the theatre I want to be in the world--or even for why I thought this would be a great show to inaugurate our company--which was because it's a play about community and transformation, which I think are the things that comprise the heart of theatre itself. However, selfishly, it's what attracted me as actor, along with the promise of getting to work with some of the actors I love and admire most. Having now done the show, I can actually say that Rosalind is not only my favorite character in dramatic literature, but my favorite thing that is an actual living human being.

Christopher: The production team. Ellen and Eric are very passionate, dedicated artists and I knew that they would put together a quality show.

Eric: We strove to create a highly collaborative setting while developing this production. It was very rewarding to work with a group of people that we know, love, and admire, and in an environment where everyone had a voice in what we were creating. The energy of everyone taking ownership of the piece and working together with a shared vision was very special. Additionally, sharing the show with such warm and receptive audiences was wonderful, especially given the fact that some were Shakespeare experts and others had never seen one of his plays in performance.

It's an amazing experience to work on a play that you thought you knew, only to have it open up to you in surprising new ways on a daily basis. It also grew from what was more an academic appreciation of the writing to a very heartfelt love of the story.

Alexander: I was given a lot of artistic freedom with the original music and sound design and it allowed me a lot of exciting composing opportunities. Also, having a full cast of actor/musician/singers was a real treat. Everyone was able to contribute something to the musical soundscape of the production.

Patrick: Making theatre you love with amazing collaborators is such an amazing gift.

Anna: Hearing glorious music coming at me from every side, every day. Watching people play. Being a part of people's dream-vision coming to life.

Ellen: It's perhaps the most fulfilling thing I have ever worked on in the ten years that I've been in professional theatre, so it's hard to pick a favorite part. But what emerges to me is getting to watch almost every part of every actors' performance every night, since we were all onstage during the show. The affection, and perhaps more so, the admiration I have for these actors made it utter joy to be onstage with them. It was wonderful to feel like the audiences participated in that joy, too.

Christopher: The small ensemble and the music. I like working with a small efficient group. Shakespeare's company would have been a small but versatile company of actors. They would have played multiple roles and many of the actors would have been adept musicians. I thought we did this really well.

Eric: We were wearing a lot of hats with this production, choosing to act in the show as well as taking on producing and directing duties. Keeping on top of any one of those jobs is frequently very difficult, and doing all three seemed practically impossible at times. It was only really possible due to the fact that we co-directed and co-produced the play.

Ellen and I also shared directorial duties, and this was the first time that I had so much control over the production as a whole. Keeping track of the big picture while also trying to explore a moment for yourself as an actor is tricky sometimes. But we kept an air of openness in the room and encouraged people's ideas, which helped a great deal.

Anna: Trying to put together a play like a jigsaw puzzle. Finding the flow.

Ellen: I sometimes gave director-self short shrift when there was a lot of producing work to be done, but my actor-self was most frequently neglected for either. I think this was made possible by having loved Rosalind for so many years, and having good talks with Eric about her journey before we even began rehearsals (I drew in the back of my notebook a diagram of the Rosalind Pitfalls I wanted to avoid). The hardest single moment was probably tech; tag-teaming directorial duties wasn't actually too difficult when we were looking at individual scenes, but trying to run the show and look at the the transitions while also knowing it was the only time I had to figure out my own path through it was certainly challenging.

Alexander: None. All of it was a pure joy from day one. 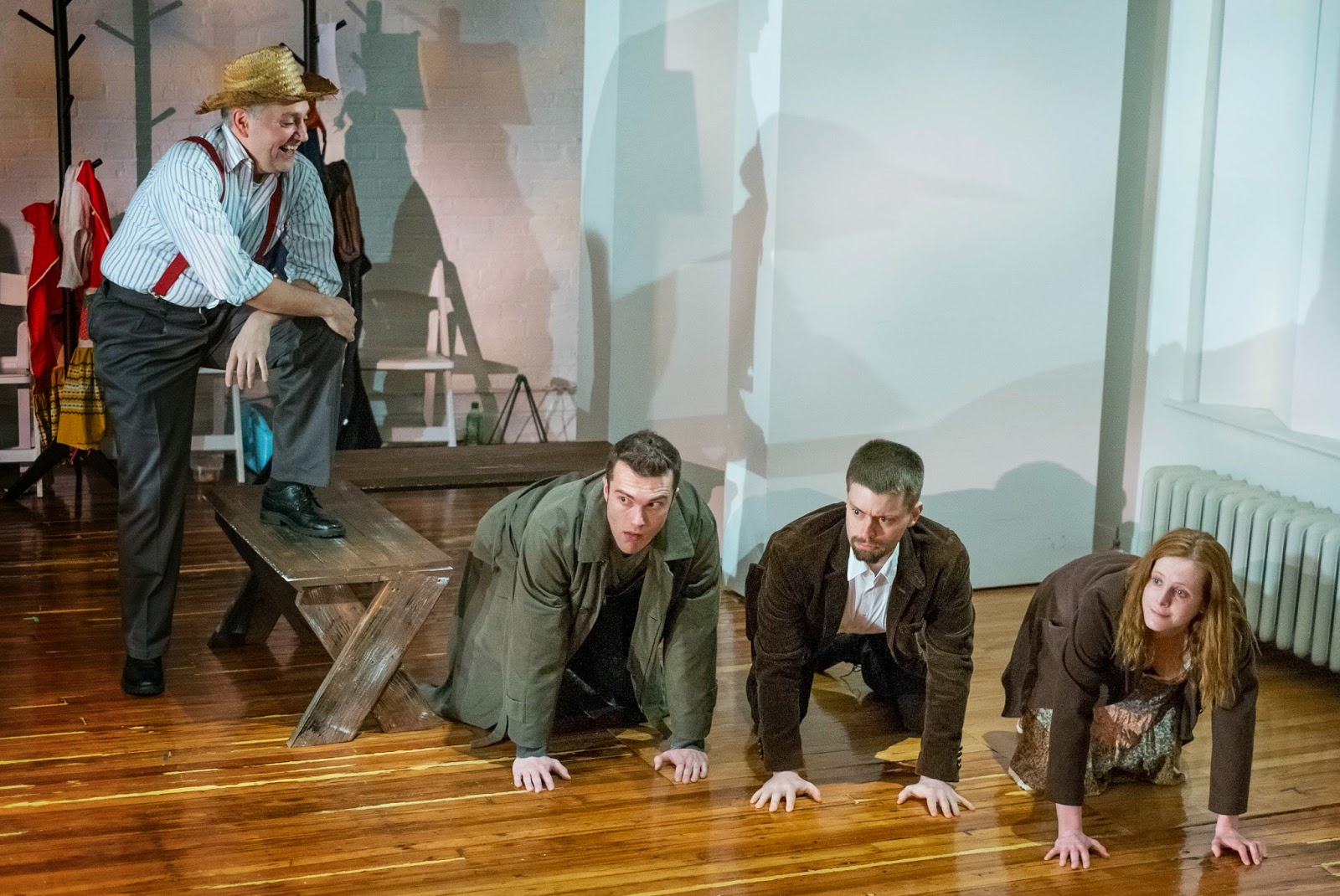 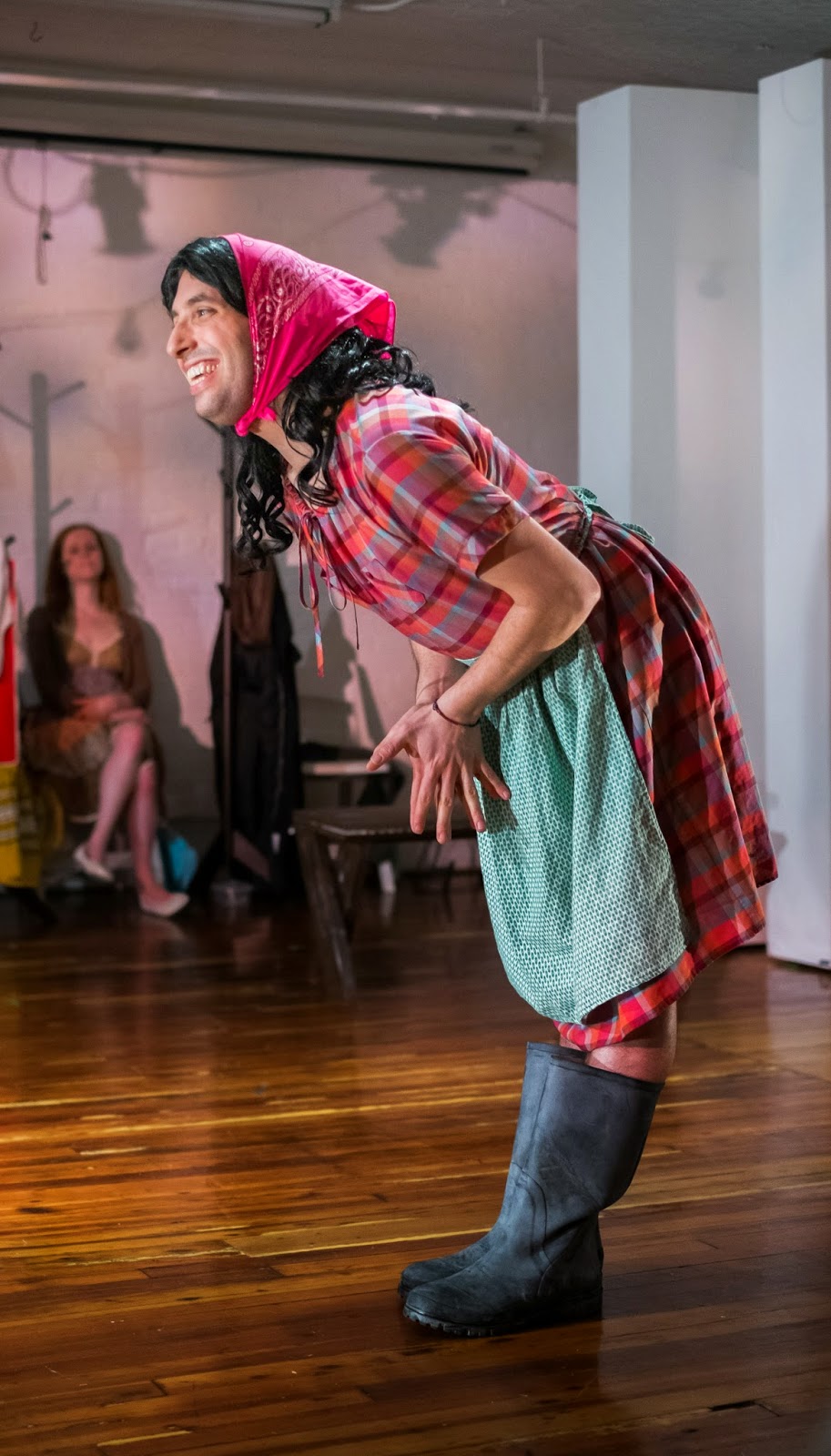 What was the craziest part of this production?

Eric: As this was our company's inaugural production, we were learning as we went as we developed every aspect of the production. The result is that it was usually an adventure where we weren't totally sure if it was going to happen. In our very first rehearsal, we were trying to film scenes for the wrestling match when a Latin-fusion band started playing in the room next to us, forcing us to rethink our entire day on the spot. The whole process was filled with the need to improvise solutions to strange curveballs thrown our way. Thankfully, the characters of As You Like It, and Rosalind in particular, go through a similar ride, so we tried to let quick thinking guide the work.

I also played Charles the Wrestler, and to do that while also playing Oliver involved me having a scene with myself. We did it as a video conference and it worked far better than it had any right to. And since we did the filming two months before the show, I got to change up my hairstyle and look really different, while also clearly talking to myself over video. It was a lot of fun!

Ellen: Well, I did cast myself as Adam, Orlando's old servant, without knowing how I was going to possibly pull it off. This was another thing that Eric indulged me in working a lot on ourselves; I had a version of Adam that ultimately solidified because I tried a lot of other things that we both agreed did not work. I became very fond of Adam, of course, and so thrilled by an opportunity to play a role I would probably never get to play otherwise. I would not have complained on my death bed, but I think my life is so much richer for the inclusion.

Alexander: well, I got to play a woman's role and wear a dress. I made for a very interesting looking woman. :-)

Anna: We played sheep! Who gets to do that?

Ellen: I wanted the audience to come away having felt they participated in theatre's unique strength, that it's a celebration of everyone experiencing the same thing in a room, together. I hoped our production would emphasize the importance of community, both in the play's own plot, our method of working together, and in the integral communion of actors and audience. We wanted to welcome and enfold the audience into the experience without making demands. I suppose it's easy to say that any theatre production might want audiences to come away with the same thing--but this was truly the point of our take on "As You Like It." Without wanting to bash anyone over the head with a concept--because telling the story was our chief aim.