About The Secret Theatre
The Secret Theatre strives to provide New York City and surrounding communities with inexpensive, but high-caliber performances, to expand the horizons of patrons young and old alike who would normally not venture outside of the main borough. As a venue for assorted live entertainment, particularly classical theatre, as well as new works, comedy, and musicals.

About Eight Tales of Pedro
Two sets of storytellers, some now and some in the 17th century, cross a country - risking everything for a new life. As they tell their tales, their lives and plots combine and intertwine into the same conclusion.

What first attracted you about working on Eight Tales of Pedro?


Federico: Working with an all Latino cast telling a story that invites the audience to be empathetic with the Latino experience in the US in contentious times and accomplished it by also finding humor and joy in it.

Luis: The opportunity to develop a score in an unconventional way, plus working on an original Latin American work


What was your favorite part of the production?


Federico: The people. They were incredibly welcoming and that for me is one of the main (if not the main) characteristics of the Latino community.

Luis: The cast and crew. It was like a family, and there was this collaborative spirit where everyone felt invested in the work. Truly amazing group of humans.


What was your biggest challenge of this experience?


Federico: Very quick changes from character to character and switching from very light humor to the heavy stuff. You want to make sure those two land how they’re supposed to.

Luis: Listening. My work was an underscore that adapted to the play. It involved equal parts composing, and improvising to the rhythm of the performances, which involved a lot of listening tp the performer of each piece. The music became an active ingredient, but it could not overshadow the actor. So, it was like scoring a film in real time, which made it really organic.

What part of you did you bring to the production that changed what was presented to the audience?


Federico: I was the only actor in the production whose first language was Spanish, that brought the opportunity to expand the language and jokes of the show.

Luis: The way we let the music interact with the actors, as if it were another performer, felt pretty innovative. Something I think helped us connect was having me, the composer/guitarist, be part of the warm up exercises before each show and rehearsal. It's a level of cohesion that really benefited the presentation of the piece.


Federico: Their warmth, love and joy for what they do. How welcoming they are. How willing they are to play.

Luis: A production team that feels like a family, especially one that is really trusting, and that allows each artist to bring what they know best to the table, trusting everyone comes from a place of shared respect and dedication towards the play and the subject matter. 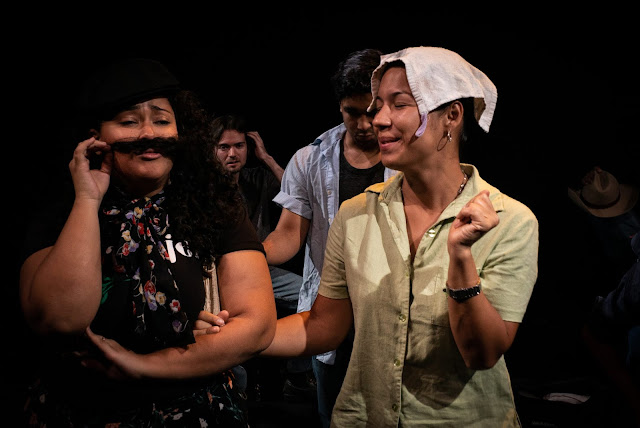 Did you gain any insight or learn anything new from this experience?


Federico: I learned a lot of about the immigrant experience in the US (first generation/ second generation), and also a lot about folklore in different parts of Latin America.

Luis: New possibilities regarding composing a score and accompanying a theater play by listening and reacting to the actors and performers.


Federico: It doesn’t happen often that I decide to do a play just because of my love for it. I loved the script instantly and my gut told me to do it no matter what the outcome. It’s good to know that that can pay off. It’s also special because sometimes I wonder how I fit in within the industry.

Luis: Truly an honor, but also a recognition towards this approach that connects actors and musicians into an organic unit, which I believe has endless potential for new and innovative theater experiences, not only for the audiences, but also for the performers involved.