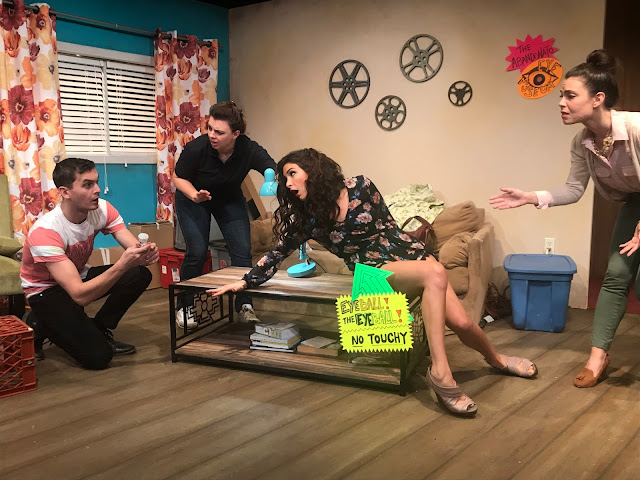 About Plan G:
Life has beaten Christopher Abandonato down. He’s got a dead-end construction job, a wife who puts him in his place, and an out of work brother-in-law living in his basement. But he’s a dreamer, and he’s convinced buying abandoned storage units is his ticket to becoming rich. He just needs to find that special something that will change his life forever. Plan G is a DARK comedy about seeing an opportunity when its starring at you.


What first attracted you to this project?

Lauren: A script about an eyeball. Truly original!

Tiffany: It was such a wild, dark comedy about a freak discovery that forces a family to grapple with fame, greed, classism and doing the right thing

Sarah: I saw a friend in Larry's play The Weekend Will End, and I loved his writing so much that I reached out to him afterward. I love working on new plays, and Larry sure can write a good one.

Forrest: It’s very well written and made me laugh out loud time and time again, even while reading it.

Larry: I wrote it, so narcissism at it's finest.


What was your favorite part of working on Plan G?

Lauren: My favorite part was the conderful cast and team, which you need for an ensemble piece.

Tiffany: Duking it out with Larry Phillips (who plays my husband) every night onstage. I always enjoy a good row with Mr. Phillips!

Sarah: Honestly, the cast made the whole experience. Everyone was equal parts fun and professional!

Larry: The calibration of working with a mixture of friends that I've worked with prior, and brand new friends.

Forrest: Actually performing the show had to be my favorite part. Between hearing and feeling how much the audience was along for the ride and finding a groove with my nothing beat the actual moments where we were on stage.


What was the most challenging part of this production?

Tiffany: Maintaining my New Jersey accent once the character Shannon (Lauren LeBeouf) gets on stage! Her character was from the south and once she started that drawl my native Texas twang would just try to slip in there and join her.

Sarah: I loved my character, Elizabeth, but she's could be really cold and self-serving. It was a fun challenge to balance the aspects of her that were sympathetic and likable without trying too hard to redeem her less... desirable traits.

Forrest: The most challenging part for me was dealing with the fact that I wished more people knew about this production while it was happening. 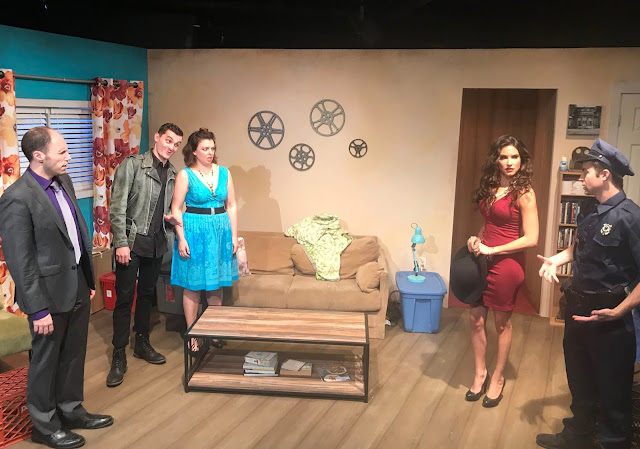 What was the silliest part of this production for you?


Sarah: My character was only in the second half of the show, so I had about 45 minutes of downtown backstage before I made my first entrance. I'd like to say I was diligently studying my script, but mostly, I was surfing Twitter.

Forrest: My cast mates were so damn funny, in the early rehearsals I would miss my lines because I’d just get caught up laughing and watching them!


Did you gain any insight or learn anything new while working on this show?


Lauren: Talking in a Southern accent came very naturally, even though I had never performed with the accent before. Playing a dumb character takes a smart and clever actor!

What was it like working with Randomly Specific Theatre?
Lauren: Larry Phillips is an experienced writer who writes truly original scripts. Full of comedy and heart.

Tiffany: This cast was a hoot to share the stage with! Always bringing in ideas, listening, and willing to adapt and just play.

Sarah: Everyone treated their character and the show with so much respect throughout the process, and everyone was so funny!

Forrest: Developing lasting quality relationships was the best part of work with this company.


Why is the Ensemble of Plan G so awesome?


Larry:  A lovely group of people both inside and outside of the process.

Forrest: I genuinely believe my cast mates deserve this award and I am lucky to have worked with them. This show itself deserves another run, in a larger spotlight, truth be told.

Lauren: The world! This was my first play in NYC (outside of my acting school). Such an honor!!

Tiffany: I was so proud of this cast and crew that receiving a nomination for ensemble work is just so exciting! We worked hard and had so much fun making this piece of theatre, the nomination truly touching.

Sarah: Lately, I'm trying to lean into making theatre I like, so it always means a lot when other people like it, too.

Larry: An Ensemble nomination means everything clicked. The Director and producer's work in casting. The writers vision as the play. And obviously the actors sold the story. I love ensemble comedies, this means we did something right.

Forrest: It’s like a little dose of chicken soup for the actor’s soul to find out months later that all the hard work we put in didn’t go unnoticed.