Produced by Transforma Theatre, Inc.
Created by Tjasa Ferme
Developed with and Directed by Ana Margineanu

About Transforma Theatre, Inc.
Transforma Theatre is a center where art tackles how scientific ideas and metaphysical knowledge about consciousness overlap. We explore the nature of existence and consciousness through science, shamanic rituals, and express them through the creation of multimedia performances. We are pioneering a new form of theatrical expression and developing a close community of artists and scientists instilled with the freedom of thinking and creating in alternative ways.

What first attracted you to this project?


John: I was interested in using live brain activity to influence the video design: the possibilities are tremendous and we were able to start what I hope will be an ongoing exploration in the video design for this piece.

Tjasa: I have always been fascinated by strong, unusual, independent women who were able to carve their own way in the world and defy the norms. The media’s portrayal of women frustrated me and as a tomboy growing up, I always felt the desire to break the mold. I realized we don’t have enough female role models that would represent freeminded, self-defining, pioneering women reinventing and transcending gender, so we decided to make a show about it.


John: It was an incredible team working on this show. Director Ana Margineanu is an exceptional collaborator, as is lighting designer Ayumu Poe Saegusa. Also production manager Jeremy Goren and stage manager Mariah Plante were a dream to work with.

Tjasa: Figuring out the audience participation parts. The show presents two intimate scenes where actors connect with audience members wearing headsets while their brain activity is being projected for everyone to see and interpreted by a cognitive neuroscientist live on stage. 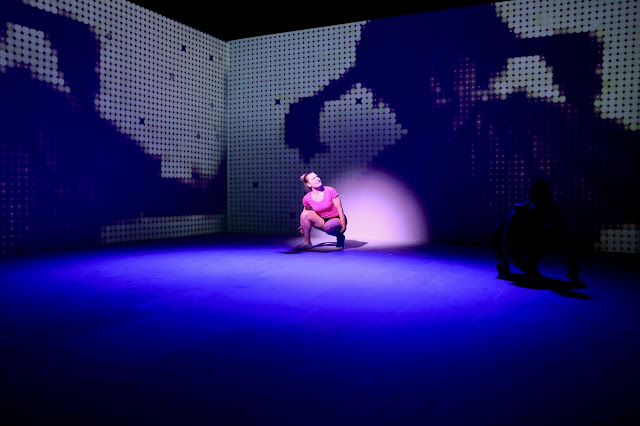 What was the most challenging part of this experience for you?


John: We were working on a very short development timeline - there was significant software to write - in part because I was interfacing with live brain data, but also because I wanted the whole design to have a uniform quality of liveness, even when brain data was not modulating the imagery. So in addition to creating the design, I was creating a whole software framework to support it.

Tjasa:  Aligning technology with the tempo of the stage was a big challenge.


What was the weirdest part of this production?


Tjasa:  In the last scene the actors are wearing headsets which influence the audio design. The audience-by asking cognitively and emotionally provocative questions-becomes the DJ of our brains.


Did you gain any insight or learn anything new from working on this production?

John: I think the software that I developed for this piece in order to make the design flexible enough to respond to real-time brain data is the beginning of a whole new design exploration for me; it's a very flexible base to build from, and I think I'll be able to use it as a starting point for future designs where I want a responsive and flexible structure. It has a lot of image possibilities, from pointillistic to stellar to pop-art to totally abstract. It's a rich territory I'm excited to explore.


John: I had tremendous freedom to explore the visual ideas I was interested in, and there was a strong sense of trust among the design and production team. We were able to work quickly and intuitively, which is very much my preferred working style.


What did you want the audience to walk away with after watching The Female Role Model Project?


Tjasa: I want to blow their minds and show them a glimpse of what's possible 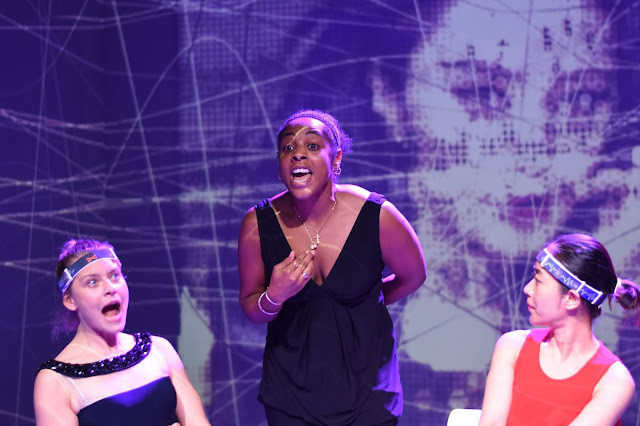 
John: It's an exciting moment for me - I was very pleased with the projection design, as were my collaborators, and it was disappointing that the design was not discussed at length in reviews after the show. I felt it made a significant contribution to the piece, and was a successful and innovative design, so I'm very happy to receive this nomination.

Tjasa: I'm ecstatic, especially because we are just about to start performing at Edinburgh Fringe!

Posted by IT Foundation at 2:31 PM