About the Seeing Place Theater
The name "The Seeing Place" is the literal translation of the Greek word for theater (theatron): ". . . the place where we go to see ourselves." The Seeing Place is an actor-driven company dedicated to exploring the intersection between the actor's voice and the playwright's words, by reinterpreting masterful works live and in the moment to make them relevant, visceral, truthful, and accessible to a modern audience. We live up to our name by engaging our community in a vivid conversation about what makes us human. Connection. Learning. Humanity. That's what theater is all about. 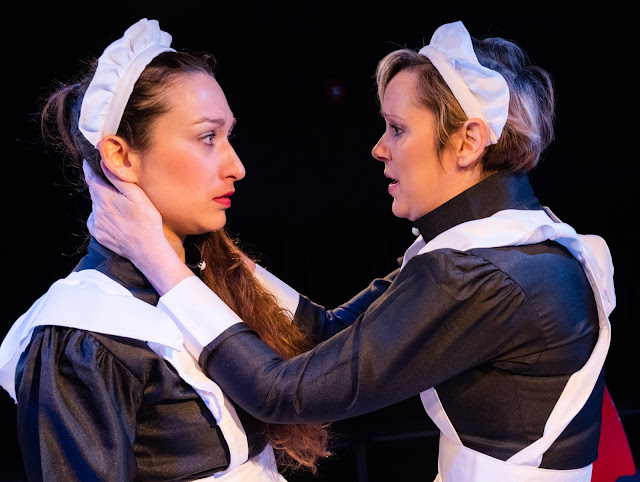 About The Maids
Two sisters, maids to a wealthy society woman, act out fantasies of class, love and revenge while the lady of the house is out on a romantic rendezvous. As their games intensify, the incipient violence escalates as they await Madame's return.

What first attracted you to The Maids?


Erin: When choosing to produce and direct this show, we were struck by the feminist and classist themes that are highly relevant in society today. Plus, it's a show that would heavily promote three talented actors in our theater company - seeing plays with an all-female cast is a rare and exciting treat.

Gaia: I was always intrigued by the play and wanted to really work on it as it's so bizarre and seems non-sensical. 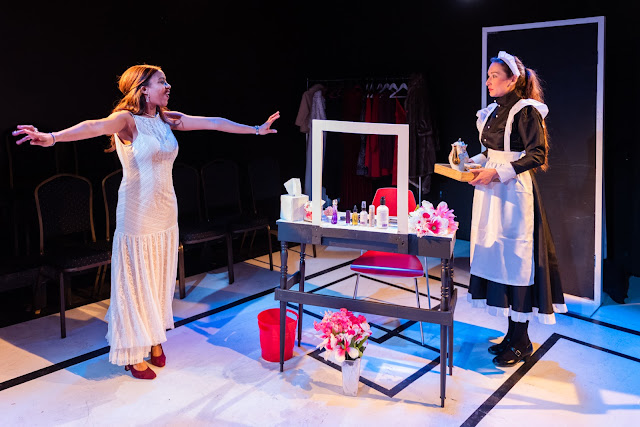 What was your favorite part of work on this production?
Erin: I loved having conversations with patrons in our lobby after the play who found the play resonant and important. It was also wonderful diving into the play dramaturgically with the cast and creative team.

Christine: Learning how to approach the script in a different way. It changed my perspective.

Gaia: The organic approach of The Seeing Place Theater, really exploring the humanity and drives of the characters.

What was the most challenging part of this experience for you?
Erin: How deep the play goes! We gave ourselves two months of dramaturgical and rehearsal time and we still felt like it was just skimming the surface of what was possible. That's what's so beautiful about well-written plays.

Gaia: Really diving into the characters and their reality, coming to terms with their suffering and trapped situation - which is the source of the games they play. Also, it is a very heavy show, and the nature of the theater company is to go all in, so we really had to dive into the ugly, painful and uncomfortable as well. 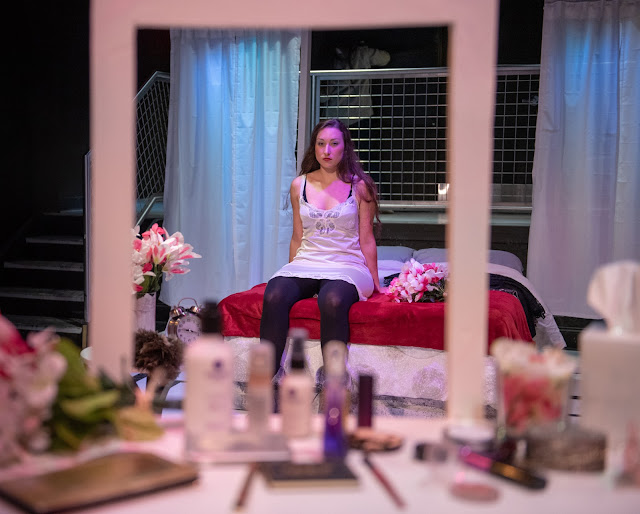 What was the most noteworthy part of this production?


Erin: It was wonderful working with so many fierce females in this production - from our director (me), to the cast, to our stage manager and lighting designer.

Gaia: The process with The Seeing Place is always very much in the hands of the actor - we weren't really directed, just placed into the frame of the show, so we had to figure out what we are doing by ourselves and new reality was created on stage every night.


Erin: Their commitment to the creative process was inspiring.

Gaia: As mentioned before, the nature of their work - really diving into the core of the character's complex psychology and human behaviour, as it comes out, not as we think it should.


Did you gain any insight or learn anything new through this experience?


Erin: I discovered how much resilience I had, and how strong that made me. Many people did not know that I was going through chemo for stage IV cancer while we were in production. To be able to come to the theater each night was a challenge in itself, and I learned that the audience can give back to you as much as you give to them. I count myself very lucky that I had the play to focus on while going through treatment.

Gaia: Yes, I got a much better understanding of the play and the character of Claire. I've learned that all the weird things that seemed absurd and out-of-the-blue for me when I was reading the play are rooted in normal, basic human emotions. 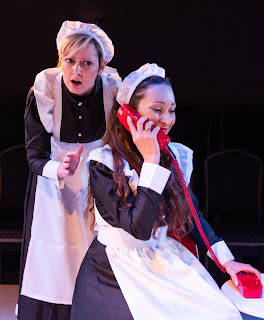 What does it mean to you to receive this nomination?


Erin: It means a lot to know that this production made a difference to our audiences, and to the Indie Theatre community. It inspires us to keep going with this kind of work.

Gaia: I am very honoured and humbled by the very unexpected nomination - as an artist, I am focused on doing my work and never think of a reward other than performing what I've been working on. It is nice to be recognised for something you've invested in so much.