The Fantastical Dangerous Journey of Q

About Rebel Playhouse
The Rebel Playhouse is a non-profit, educational theater company that produces productions for children and families based on stories that break traditions and challenge normative thinking, and offers classes designed to foster creative development. By rebelling against established stories, we ignite children's imaginations so they can learn to create their own stories by thinking outside of the box and uphold our mission to Empower, Educate, and Entertain our audiences. 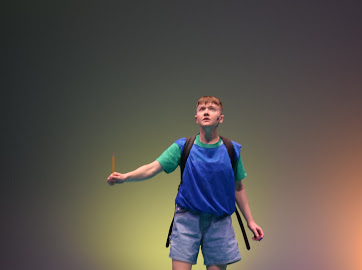 About The Fantastical Dangerous Journey of Q
The story of Q, an upper elementary student struggling with gender and identity issues, who faces the daily difficulties of preoccupied parents, bullying peers, and communication with challenging teachers... but with a bag of tricks shared by Q's neighbor Nix, everyday objects grow and are endowed with powers that allow Q to face larger than life threats head on! This new hour-long musical features song, dance, and puppetry.


What first attracted you to The Fantastical Dangerous Journey of Q?


Sarah: This piece was commissioned from playwright by Ric Averill by Rebel Playhouse and the development process was overseen by myself as Rebel Playhouse Artistic Director. I had long been interested in developing a work for children that explored gender fluidity and showed the experience of a non-binary child being forced to exist in a binary observing world. I wanted to take the commonplace and ordinary and make it extraordinary and even dangerous.

Milo: Getting to play an elementary schooler was very playful and freeing! I laughed my butt off every single day which really helped me get through some of the more difficult and vulnerable aspects of the process. And it meant so much to me to play a trans kid, having been a trans kid who didn't see anyone like me represented in media growing up.

Sarah: Milo (the incredible performer in the role of Q) was an absolute delight to work with. He gave incredible insight and care in the development of Q and created a protagonist that had profound depth and vulnerability.


What was the biggest challenge you faced during the production?


Milo: Reliving the pain and loneliness of growing up trans and feeling misunderstood by my parents, peers, and teachers - even those who "meant well".

Sarah: Although we had two non-binary performers and a non-binary dramaturg and stage manager, the majority of the cast and creative team was cisgendered. It was a delicate balancing act to create a safe space for our team and create a culture of listening and correction, while working under a very limited rehearsal period. I am eternally grateful to the incredible team assembled for this piece for their honestly, openness, and willingness to 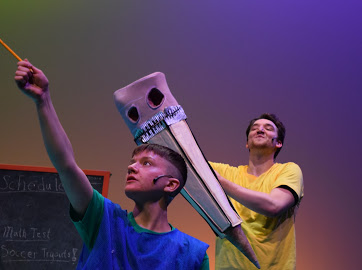 What was the most meaningful part of this process for you?


Milo: One day after the show this kid came up to me--super shy--to ask if I was a boy or a girl. I told them "neither"! And their dad thanked me profusely and said they had a lot to talk about after seeing the show. That was just the best feeling in the world to make gender diversity part of a story they could enjoy and relate to. Now they will always know there are more than 2 ways to have a gender and will hopefully never levy shame at themselves or others for exploring the expansiveness of their own identities.

Sarah: This was my first experience as artistic director (and Director) building a piece from scratch with a playwright. That in and of itself is quite an experience! Two readings, a residency and workshop production later, and our world premiere run at The 14th Street Y felt very much like a first child. What a roller coaster! Playwright Ric Averill, Musical Director Christina Bottley, Puppet Designer Rosa Douglas and Dramaturg Mak Morin are all true professionals and delights to work with and made this Fantastical adventure feel truly magical.


What did you want the audience to walk away with after seeing The Fantastical Dangerous Journey of Q?


Sarah: I want audiences to come away with a recognition of how entrenched in the binary our society is and how that must be challenged. The current structures of education, public spaces, and even casual interactions create uncomfortable and, yes, even dangerous circumstances for many individuals. This experience of the world is foreign to many cis people who can comfortably exist in it, so I wanted to create a visceral sense of danger and fear accessible to all.


Sarah: Milo is smart, punctual, vulnerable and playful. He is not afraid to speak his mind, or challenge ideas in the name of making his character and work stronger. I had seen him in a production a full year before “...Q” and I remember thinking he would be so phenomenal in the title role. I was beyond pleased when Milo submitted for an audition and even more so by the dedication and passion put into the rehearsals and performances. 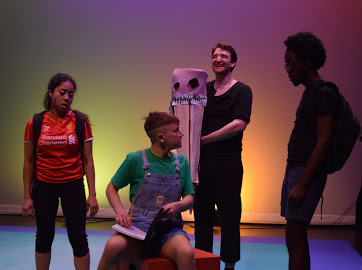 
Milo: As a trans/nonbinary person being recognized for playing a trans/nonbinary character, it's not only an honor for me as an artist, but a step forward in representation for the world of independent theatre and Off-Off-Broadway that I can only hope will trickle up to larger stages and platforms and allow trans voices to be amplified across our industry.

Sarah: I am so moved and honored that the It Awards saw in Milo’s performance exactly what we were all hoping the audience would see. This is our third nomination for a relatively new company, and we couldn’t be happier at this recognition.

Posted by IT Foundation at 1:42 PM