Befuddled! Or, 101 Reasons to Thank Your God for Donald J Trump, Vladimir J Putin, and My Dad Who's a Dick!
Written and Directed by Rob Reese
Presented by Amnesia Wars Productions

Monologist Max Silver is jolted from his mundane existence into a schizophrenic Max Headroom style dystopia. An immediate intersection of his parental resentments, his painful breakup, a deficient understanding of American politics, Russian history, artistic manifestos, and every bit of media he’s ever consumed result in a hilariously failed journey of self-discovery.

Join Max as he endures breakneck cue-calling and biting criticism by his antagonistic Stage Manager Laventry Beria, and incomprehensible heckling by Ivan The Translator.

What attracted you to working on this project?
After touring through much of eastern Europe with The Wooster Group, Piloblous Dance, and other companies I became fascinated with the effects of Communism and dictatorships on peoples' lives. The piece that resulted is an expression of those ideas through my own biographical filter.

What was your favorite part of working on this production? And why?
The incredibly creative collaboration from the performers is what made this piece stand out. Their individual artistic visions and playful professionalism were fundamental to this process.

What was the most challenging part of working on this production? And why?
The performer (Lexi Orhpanos) embodying the 'role' of the Stage Manager was not only performing her character, but was actually firing the tech of the exhibition as a real Stage Manager would. This is >100 cues on several different machines interactively displaying video, audio, and lighting cues.

What do you want the audience to come away with after watching your production?
Confusion! Any entrenched opinion an audience member has about any of the topics addressed in our exhibition should have at least been shaken.

Why are the nominees from this production awesome?
They are talented, engaging artists who also couldn't be nicer, smarter, or easier to work with. 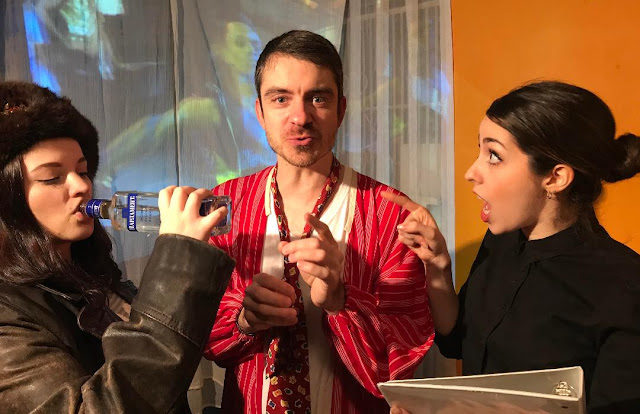 Posted by Ariel Estrada at 8:24 AM