About the Show
It’s business as usual at the Washington D.C. Science Museum where the employees’ personal lives keep getting in the way. Jo wants a child but is unable to secure an inseminator. Chet longs to make love, but dating kinda sucks and gaming is way more awesome. Claire searches for purpose by digging directly toward the center of the earth. Vadim prioritizes the needs of others but wouldn’t know his own if they crawled into bed with him. Eloise lives in a treehouse and brushes her teeth with space particles. When chaos ravages a perfectly average day, these co-workers are flung into a cosmic galactic shift, rearranging their internal cartography. In these desperate times, Cannibal Galaxy: a love story is a new play about how we keep breathing as America eats itself alive.
http://www.betweentwoboroughs.com/cannibalgalaxy 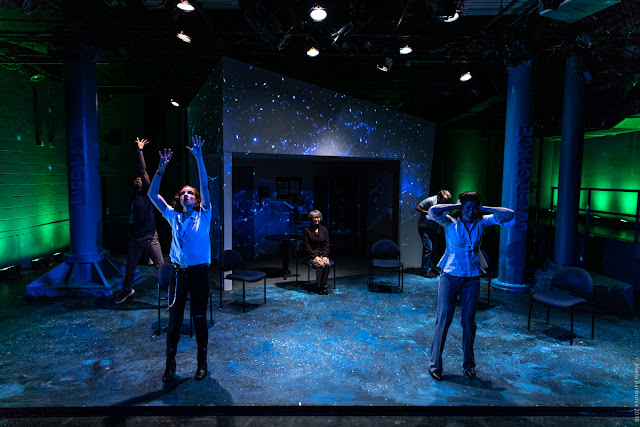 What first attracted you to working on this show?
The driving idea behind our company mission statement is to choose projects that scare us. We knew we wanted to produce this play immediately upon reading it. Cannibal Galaxy: a love story is an incredibly ambitious, scary, “impossible play” – the subject matter, the stage directions, the sheer size of the piece (21 scenes in 90 minutes). And it was like nothing we had worked on before.

What was your favorite part of working on this production? And why?
After working on this production for over two years with only our imaginations of what it could look like staged, being in tech and seeing all of the design elements come together to create a beautiful, ethereal, magical world was absolutely thrilling. Finally seeing it all come to fruition was overwhelming, to say the least. It was also the first time our company produced a new play. Having the playwright in the room and working with the cast on a “living” piece was exciting new territory. 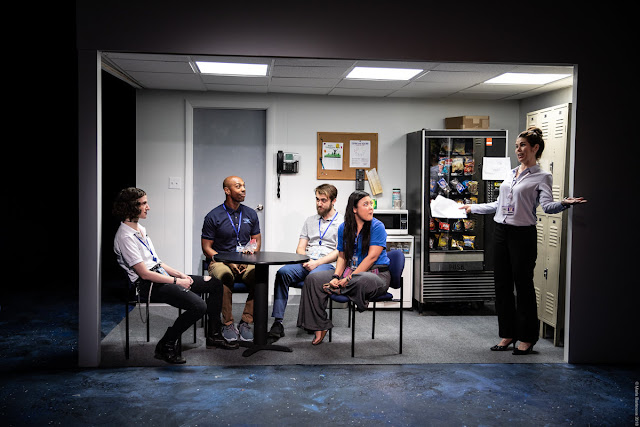 What was the most challenging part of working on this production? And why?
This play is a jam-packed 90 minutes with many moving pieces, and there is a lot of magical realism in the script, so we needed to find practical, creative ways to stage those moments. For example, with a stage direction like “Eloise explodes into stars,” we had to figure out how to make that happen through design. We also brought a vending machine to life!

Was there anything odd, quirky, innovative, funny or otherwise noteworthy about your experience with this production?
This play is a jam-packed 90 minutes with many moving pieces, and there is a lot of magical realism in the script, so we needed to find practical, creative ways to stage those moments. For example, with a stage direction like “Eloise explodes into stars,” we had to figure out how to make that happen through design. We also brought a vending machine to life!

What do you want the audience to come away with after watching your production?
We believe that art is a powerful tool for change, and given our country’s current climate of violence, we were eager to bring people together to reflect upon what has become a national epidemic. The play is ultimately about connection and how our own personal worlds – and the world at large – shift when something terrible happens. We wanted our audience to walk away knowing that they might share more with the people around them than they might have initially thought. We also partnered with two advocacy organizations during the run (Moms Demand Action for Gun Sense in America and No Stigmas), collecting donations after each performance and hosting talkbacks. In addition to the cathartic experience that we hope audience members had during the play, we were also eager to create a space in which we could talk about how to be proactive in today’s gun culture. 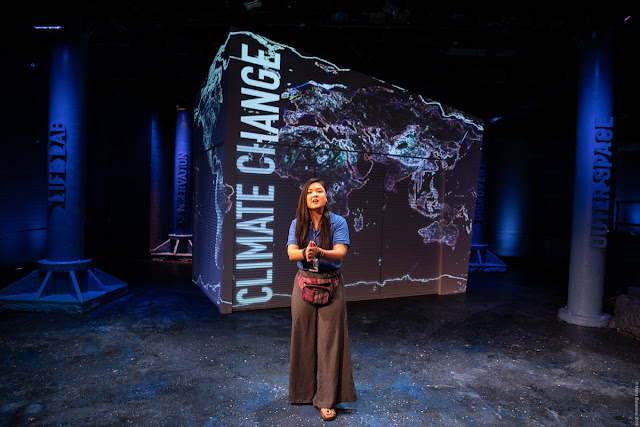 What is the best thing about working with this company and/or these artists?
The design for this play was vitally important to the storytelling. Our designers brought unique ideas to the table, ready to problem-solve and tackle all the challenges that came our way. All three elevated the work to something we couldn’t have ever envisioned on the page. They transformed the New Ohio Theatre in ways we’ve never seen before!

Did you learn anything or discover anything new while working on this project? If so, what?
We were able to incorporate into our projection design actual models of cannibal galaxies which we received from a NASA scientist! Also, sticking to the science theme, we had a talkback with a Professor of Astronomy from Columbia University all about galactic cannibalism.

What does receiving this nomination mean to you?
It is an incredible affirmation of the years of work we put into bringing this play to life and telling this important story.